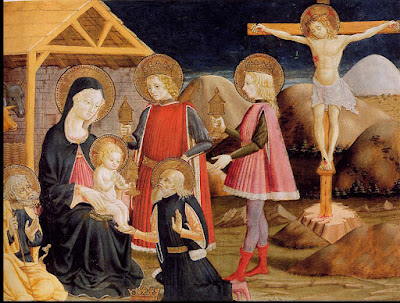 Yes, you read the title of this post correctly. The God of Christmas is an embarrassment. The God of Abraham, Isaac, and Jacob has no self-respect. The God who comes to us in Jesus Christ is unconcerned about his reputation.
Christmas is proof that God will stoop as low as is necessary... and I mean really low... to get what God wants. In Jesus Christ, God has come into the muck and the mire of the human situation to roll around in the dirt with us humans in order to rescue us from the muck and the mire. Instead of coming into this world in the royal garb worn only in a palace, this God chooses to be born to nobody peasants in a nowhere backwater town. The announcement of his birth is made to lowly, smelly shepherds, and the star appears to some far off pagans... magi... who were astrologers, horoscope readers, no less.
As an adult this Jesus, God in the flesh, chooses freely to party with tax collectors and sinners-- the persons whom the respectable people wouldn't be caught dead associating with. Jesus seems to have cared less about the loss of his good name by associating with the wrong people. And not only that, he said some real nasty things to the respectable people, the religious leaders. The names he called the clergy-- hypocrites-- and telling them that the prostitutes would get into God's kingdom before they would. What nerve! This self-proclaimed rabbi refuses to pay his dues by going through the "accredited" educational channels so that he might be recognized by the people who matter. The people whom the world deems insignificant are the ones who appear to be most important to this Jesus, this God in the flesh, who apparently thinks too highly of the flesh he has embodied.
This is the God who comes to us in Jesus; the God who refuses to remain above the muck and the mire, the God who will not avoid the mess of the human situation. It's all so earthy, so scandalous. And yes, there are those who are scandalized by such a deity, even those who claim to follow this Jesus and who celebrate this Christmas season. But we must understand this-- the God who comes to us in Jesus will not be domesticated by those who seek to tame him and make him palatable to those who claim him as their Lord as well as by Christianity's cultured despisers.
The God who comes to us in Jesus will not be boxed into some cultured notions of respectability, but will instead throw his honor to the ground, as he, like the waiting father casts aside his dignity running down the road to his wayward son who has finally returned home.
The God who comes to us in Jesus will not be protected by his admirers who seek to insulate him from his scandalous doings in this world by trying to explain away his unexpected ways in this world and smoothing over the quirks in his character with a systematic account of his divine attributes.
The God who comes to us in Jesus will not be relegated to the heavens looking down on his creation in aloof and Enlightened fashion, hoping we will use the reason given to us to make our way, offering us charity but not himself. This God refuses to leave us to our own devices
The God who comes to us in Jesus Christ will not apologize for getting his hands dirty as he reaches out to those who are soiled, those who need his help.
The God who comes to us in Jesus Christ does not need advocates or PR consultants to advise him on how to improve his image in the world.
The God who comes to us in Jesus needs no apologists to defend his reputation.
What the God who comes to us in Jesus Christ truly needs are disciples who are not afraid to follow their Lord and get into the muck and the mire of this world along with him. Christmas is about the human mess and God's personal visitation into that mess, that the world he created might be redeemed. Why?
Because this God will stop at nothing to get what God wants. And that is the only God worthy of our respect, of our worship... and our undying loyalty.
The God of Christmas is an embarrassment. Thanks be to God!
Posted by Allan R. Bevere at 10:08 AM

Thanks be to God!

Love this!!! A wonderful reflection and reminder!