Christians and the Celebration of Halloween 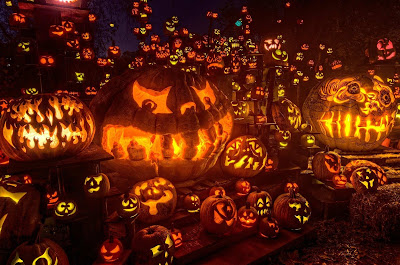 I know some Christians are skittish about the observance of Halloween. I have never been. I went Trick-or-Treating as a kid and we took our children as well. In fact, I think the celebration of Halloween has sound theological ramifications. Please consider the following:
First, it must be remembered that the word "Halloween" is a corruption (a blending together) of "All Hallows Eve," the day before the observance of All Hallows Day or All Saints Day. Hallow is related to the word "holy." In Latin and in Greek the "saints" (sanctis and agioi) are literally "holy ones"). So, those who are promoting something called "Jesusween" have completely missed the meaning of Halloween and invented an irrelevant word.
Second, Halloween does have its roots in Christian influence as it began the yearly observance of remembering the saints who have died-- originally martyrs and confessors, and later all the faithful.
Third, Christians believe that while evil still makes mischief in the world and death still takes all of us, in the death and resurrection of Jesus evil and death have been decisively defeated; they just refuse to give up. Martin Luther referred to the resurrection of Jesus as God's Easter laugh. It was the decisive practical joke played on the devil believing that crucifying God's Son would destroy God's plan. Unbeknownst to him, Satan participated in his own undoing.
Fourth, to dress up on Halloween as characters (e.g. witches, the devil with a pitch fork) which have come to represent the forces of evil is our way to participate in the practical joke of the resurrection. In dressing up as those forces we mock them, knowing that they hold no power over us, even though they continue to try. Because of Jesus we no longer fear them; in fact, we laugh at them. In the celebration of Halloween we give the principalities and powers their due, which is not much. We are reminded on October 31st not to take them too seriously.
What better way to observe the victory of All Saints Day on November 1st, than by celebrating the defeat of the demonic by our ridicule the day before?
Posted by Allan R. Bevere at 12:07 PM