Let's Talk POTUS (Any POTUS) and the Economy 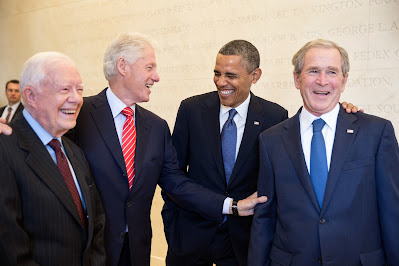 It has been rightly said that “presidents get more blame and take more credit for the state of the economy than they deserve.” All one has to do is read social media to know that the average American’s understanding of the role of the president of the United States is mostly uninformed at best and politicians use that ignorance for their advantage.
The image I like to use is that the average voter, Republican and Democrat seems to think there is a magic red button on the desk of Oval Office labeled, “Economy,” that when pressed makes the Stock Market go up, unemployment go down, and in general makes everything hunky-dory economically. They further believe that only the POTUS from their party knows how to press the button. When their guy (So far, we have only had male presidents. I hope that changes soon.) is in the White House, he knows how to press the button so that the good economic indicators are his to take credit for while the bad indicators are beyond his control. When it’s the dude from the other party, the good in the economy has nothing to do with him while the bad stuff is entirely his doing. Thus, the average American’s understanding of the POTUS and the economy is a self-fulfilling prophecy. The good stuff is always to our credit and the bad stuff is not our fault while it is just the opposite for the other side.
Let’s take one example—the price of gas. When gas prices hit their highest mark the middle of June 2022, the average price for a gallon of gas nationally was $4.98. As of yesterday, September 22, the national average was $3.68.* When gas hit its high, Republicans blamed Joe Biden. Now that it has dropped, those same Republicans are strangely silent preferring to move on to other economic indicators because it doesn’t fit with their narrative. By the way, it’s just not Republicans guilty of such economic slight of hand. When Barack Obama was president, Democrats praised the lower prices under Obama and Republicans started blaming him when prices went up. When GWB was president, Nancy Pelosi famously said, “Elect Democrats and the price of gas will drop.” Why do politicians continue to tout such nonsense? They do so because they know their base will believe it, and they need the base to vote in order to win elections. They really believe the electorate is naïve and gullible, and let’s be honest: a rather significant percentage of voters are indeed so.
So, what determines the price of gas? Ken Robinson writes, “…no one person is responsible for the price of gasoline. There are several components that impact how gas prices are determined in a variety of ways. Efforts can be made to alleviate pain at the pump, but prices are ultimately determined by supply and demand. Nothing short of increased gasoline production or reduced demand will have a significant impact on prices.”#
My friend Michael Kruse uses the image of the paddler who sits in the back of the canoe traveling down the river. The person in the back with the oar can help steer or navigate the canoe as it moves through the water, whether it is smooth or rough or rocky, but he can do nothing about the kind of water the canoe encounters. Just like the changing water of a river, the economy has its own cycle that does its thing apart from the President and Congress.
So, what effect does the president have on the economy? Well, he does have an effect, but it’s is not nearly as significant as most think.  The president appoints the Fed Chair who manages interest rates and then there is Congress who cannot be separated from the steerage of the canoe. Both the president and Congress have to work together whether it’s about taxes, government spending (less or more), or stimulus packages and other incentives. What they do matters, but they have no control over when the river of the global economy hits rough waters.
The problem is that in politics facts are often not allowed to determine “the truth.” So, politicians will continue to peddle economic nonsense while approximately 30% of the electorate will swallow it hook, line, and sinker. However, if you have read this, you now know better. If you continue to promote such nonsense than you become a liar.
It’s as simple as that.
___
*https://www.statista.com/statistics/1293019/us-daily-average-gas-prices/
#https://www.motus.com/how-gas-prices-are-determined/
Posted by Allan R. Bevere at 11:07 AM