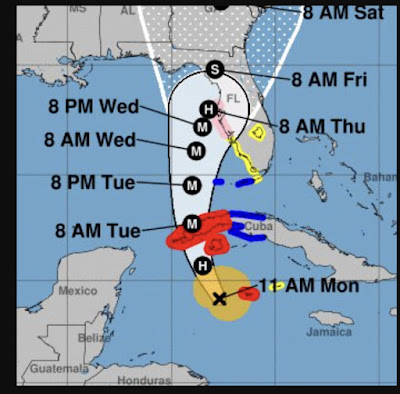 So, I wonder why all the Christian leaders who pronounced judgment on New Orleans after Hurricane Katrina in 2005 are silent now about God's judgment on Florida because of Hurricane Ian for DeSantis' treatment of asylum seekers and other very unChristian things?
That's the problem with pronouncing judgment connected to specific events. Not only is it biblical interpretive malpractice, but you get to selectively choose what events demonstrate divine anger based only on the sins that matter to you, while ignoring the sins that don't bother you all that much.
It's equivalent to saying that America has lost the biblical foundations on which it was founded. It assumes there was a time when America reflected such foundations-- the 18th, 19th, and early 20th centuries-- never mind that from the beginning of colonialization those God fearing Americans enslaved other human beings (and then Jim Crow), massacred indigenous people. (And did I mention that until the 20th century prostitution in America was legal?) By the way, only white Americans can make such a claim with a serious face. After all, what's a little slavery, segregation, slaughter, and sex for money among friends?
I have a radical idea. Let's leave the dispensing of judgment to God.  I trust the divine wisdom more than the peddlers of perdition. I have noticed that those who quote Isaiah 5:20 and Matthew 7:21-23 ALWAYS use it refer to it to those who do not share their politics and ethics. They never stop to engage in a little critical self-reflection to ask how it may apply to them. We must not forget that the Bible also has much to say about pride... but that only applies to everyone else.
Posted by Allan R. Bevere at 8:13 AM