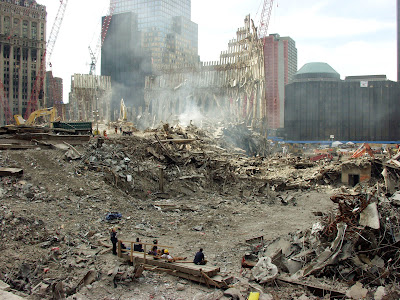 While we rightly remember those who died on this 9/11 anniversary: the victims, the first responders who gave their lives for others, and their families, Christians also need to put 9/11 and all major world events in their proper cruciform context. Stanley Hauerwas at Homiletics Online offers such a reminder.
___
...one of the things that bothers me deeply about the situation we're in is how seldom preachers tell their congregations the truth! That's where you've got to start in a genuine politics.
What would it mean to preach truthfully today? Seldom do congregations hear sermons on dying. You're going to die! Seldom are we told that and what it means to respond Christianly to that. Seldom are we told how Christians should understand war. What possesses the souls of mainline Christians in America? Greed! Everyone concentrates on sex, but greed is what's tearing us up. We concentrate on sex because we think we can figure out when we've done that wrong, but people can't figure out when they're greedy. What would they say? Owning two SUVs may be an indication of greed? What would it mean for us to acknowledge the fact that we're really possessed by greed. And it goes without saying that in America we're possessed by greed.
After 9/11, what were we asked to do? Shop! I mean, what an extraordinary thing-- that we're supposed to shop as a way to resist terrorism. Christians all over the country should have said, "Hey, that sounds pretty silly to us."
There's this extraordinary claim that September 11, 2001 changed the world. False. Christians should be saying, "No, A.D. 33 changed the world." We need to narrate 9/11 in the light of A.D. 33 and not vice versa. Nothing is more important for Christians than to demand the truth from our ministers.
Most American politicians don't lie because they're venal. The American people don't want to know the truth.
Posted by Allan R. Bevere at 6:09 PM