Some Thoughts on Student Loans, Debt Forgiveness, and Jesus Paying It All 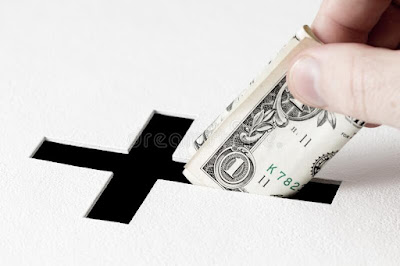 1. Reasonable people can disagree on whether student loan forgiveness is a good idea.
2. The cancellation of debt (and I mean real debt, not just some spiritual version of it) is a rather big deal in Scripture. The Sabbatical Year was given by God and central to how Israel ordered its society. "Every seventh year you shall grant a remission of debts. And this is the manner of the remission: every creditor shall remit the claim that is held against a neighbor, not exacting it, because the Lord’s remission has been proclaimed" (Deuteronomy 15:1-2).
3. After 7 Sabbath Years or 49 years, the Year of Jubilee was proclaimed in year 50. It was a year dedicated to rest, to restoration of property, and to freeing people from debts, servitude, and slavery. “You shall count off seven weeks of years, seven times seven years, so that the period of seven weeks of years gives forty-nine years. Then you shall have the trumpet sounded loud; on the tenth day of the seventh month—on the Day of Atonement—you shall have the trumpet sounded throughout all your land. And you shall hallow the fiftieth year, and you shall proclaim liberty throughout the land to all its inhabitants. It shall be a Jubilee for you: you shall return, every one of you, to your property and every one of you to your family" (Leviticus 25:8-10).
4. In the Lord's prayer we pray, "forgive us our debts or trespasses or sins" as we forgive those who are indebted to or trespass or sin against us." Some NT scholars have argued that the word "debt" is the best translation and refers to actual indebtedness. I have no opinion on this, I just think it is interesting to mention it.
5. To compare debt forgiveness to the cancelling of our debts by God in the cross of Christ is not sacrilegious nor does it make a mockery of Jesus' death. Jesus' death is the full revelation of how God works in the world and it is the example of how God expects his people to live in the world. The New Testament is replete with examples of our need to forgive and even cancel the debts others owe us. Do I need to reference the many Scriptures here?
6. Having said #5, it also needs to be said that it is not a straight line from Scripture to the foreign and economics policies of nation states. The Scripture is mostly written to the people of God (Israel in the OT, the Church in the NT). I find that Christians on the left and the right chastise the other side for quoting Scripture to impose their faith on the society, but have no problem quoting Scripture when it suits their own politics and purposes. Debt cancellation in the Bible, no more refers to student loans than 2 Chronicles 7:14 refers to the United States as God's people.
7. But having said #6, the Bible does assist Christians in creating a posture (that is where to stand) in relation to the world. Again, reasonable people my disagree over student loan forgiveness, but the reasons given by Christians matter. As a follower of Jesus, I must not begrudge what someone receives because I didn't. The fact that I paid off all my student loans is irrelevant to this discussion. If I use what is denied me to deny it to others, then I become the older brother in the parable of the Prodigal Son (Luke 15:11-32) and the first laborers in the parable of the Vineyard (Matthew 20:1-16). Neither are the heroes in these stories. And it sure seems unfair that the thief on the cross in the last few minutes of his life gets paradise, when so many faithful people lived their entire lives in honesty and integrity.
8. Finally, and what I think is the problem here: we Christians must admit that so often we are more in the world but not of it. We are happy when we receive the generosity of grace, but begrudge it when others receive it. As much as we identify with the prodigal son, too often we act like the older brother. Yes, reasonable people can disagree about the wisdom of student loan forgiveness, but why we agree or disagree and the reasons we give reveal more about us and less about the issue itself.
Posted by Allan R. Bevere at 6:00 AM