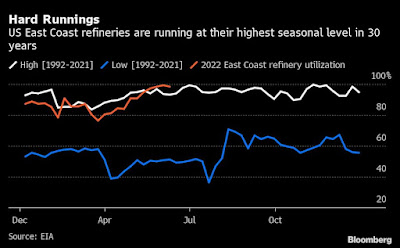 To recognize that most issues in life are complex requires intellectual humility and the ability to self-critique our assumptions and conclusions. It is much easier to live in a world of simplistic truth by memes. When problems are caused by more than one thing, it messes with the nice, little simplistic reality we have constructed for ourselves that gives order to our world. We often fail to think rigorously about the world around us because we don't want "our" truth confused by the facts; and such thinking is also hard work many would prefer to avoid.

Below is a conversation between two friends of mine: Michael Kruse and Tim Peverill over inflation and oil company profits. They are two real smart guys and whatever they write, I read. As you can see, their conversation cannot be reduced to a meme for good reason.

I invite you to read their words and add your own reflections that also cannot be reduced to a meme.

Assertion: "OIL companies have record profits. They are creating the aspect of inflation that is creating the most concern about inflation."

Michael Kruse: I think the Petroleum industry is more complicated than surface issue of profits.

With covid, liquid fossil fuel consumption dropped by about a third. Petroleum company profits took historic hits in four quarters spanning 2020-2021. By late 2021, the economy began to heat up again, and demand increased.

Because of the sudden demand drop, many drilling firms went bankrupt or redeployed their assets. Refineries closed. Petroleum has now recovered more than half the production lost since covid but the ramp-up of production is not able to keep pace.

Supply chain issues plague the drilling industry. Equipment once procured in 10 days can now take months. Once a refinery is shuttered, it can take months to bring it back online. The burst in demand is exceeding the capacity to produce. Meanwhile, the Russian war has taken more petroleum off the market decreasing supply even more.

Crude oil is a global market, so domestic policy decisions or decisions by individual firms must be made in that competitive context. The price of oil is escalating because supply can’t keep up with demand – not due to hoarding for profit but due to production capacity constraints. Oil companies are making big profits, but largely due to market dynamics beyond their control. A year or two ago, they took massive losses, also due to market dynamics beyond their control.

Another related issue is that going back almost a decade, drilling investors have become much less aggressive in expanding drilling. Historically, the idea was there would always be more demand for oil, so snatching up reserves and drilling them promptly was a good investment. With climate change concerns and the move to renewable energy, fossil fuels are now seen as a declining commodity.

To aggressively drill for a product with declining demand isn’t profitable. So, the focus has become more about near-term profitability – drill enough that your prices stay competitive with alternatives but not so much you drive prices into the ground and lose profitability. Continually reduce supply as the commodity withers to get maximum profit before the commodity is gone from the market altogether. Even in an energy crisis, this has dampened enthusiasm by investors to get into the drilling business.

My point is not to defend oil companies. I’m taking internet memes to task for attempting to distill fuel price problems into an “evil corporations” narrative. That narrative makes it easier to rally people against a common target but it is a woefully simplistic view if real solutions are sought. And frankly, there aren't many actions to take other than riding it out and minimizing the damage.

Tim Peverill: Michael, have you read Rachel Madow's book "Blowout"? Some industries are more prone to corruption and public abuse than others due to the nature of the enterprise and the way government policy and markets interact. The extractive nature of this commodity and the public addiction to it make it especially prone to abuse.

The "oil curse" affects not only the unfortunate people of petro-states, but gives petro-regimes an outsized influence on a world-wide market - not to monopoly and market manipulation as many progressives imagine, but in a culture of corruption that spreads into these multinational companies. Oil companies prop up these regimes and are corrupted in the process. It seems beyond dispute that oil companies have more political power than is healthy both here and abroad.

But you are right. Market forces still mostly set the prices of this commodity. Nevertheless, we desperately need to replace fossil fuels and break our captivity to this industry.

Michael Kruse: Tim, I haven’t read Madow but definitely aware of the big challenges resource extraction industries in general, and the petro industry in particular, bring. Here I am addressing a specific thesis: Gas prices are high because of strategic choices of oil companies to exact exorbitant profits. I am saying that thesis is false. In fact, I would argue that it is not in the oil industry’s best interest to have an extended period of high prices. It makes alternatives more economically attractive.

Another thesis holds that prices are high because of Biden’s green agenda. That also is false. What I wrote above is what I think is the major culprit. But we don’t like to acknowledge that we are frequently at the mercy of uncontrollable social/economic dynamics. It is more emotionally satisfying to find a scapegoat - in this case, evil corporations for the left and Biden/Dems for the right.