Deconstructing Memes: The Soldier and the Cross 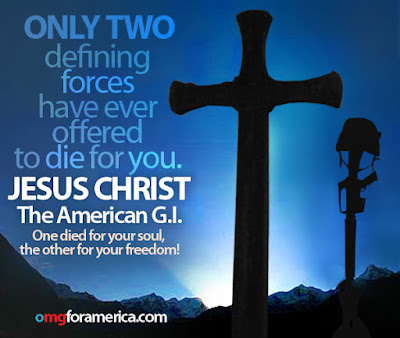 Today I begin a new series entitled "Deconstructing Memes." Memes can be funny, but they seldom make good arguments (though some of them do make a valid point in reference to a strictly particular assertion).
To recognize that most issues in life are complex requires intellectual humility and the ability to self-critique our assumptions and conclusions. It is much easier to live in a world of simplistic truth by memes. When problems are caused by more than one thing, it messes with the nice, little simplistic reality we have constructed for ourselves that gives order to our world. We often fail to think rigorously about the world around us because we don't want "our" truth confused by the facts; and such thinking is also hard work many would prefer to avoid.
Here at Faith Seeking Understanding we insist on doing the hard work of nuanced and careful reasoning. Without them what passes for the truth is often no more than wishful thinking.
I hope to deconstruct a meme every week or two.
___
We are in the season of American Independence. July 4th is upon us and this year America will celebrate its 246th birthday with much fireworks and flag waving. On social media, we will also see the meme above and others like it. It reads, "Only two defining forces have ever offered to die for you. Jesus Christ and the American G.I. One died for your soul, the other died for your freedom." Some other versions of the memes reverse the two putting the American soldier first, but essentially they are saying the same things. The question before us is whether this meme is completely accurate. Let's deconstruct it, shall we?
Only two defining forces have ever offered to die for you. This first sentence consists of an absolutist fallacy. There are only two defining sources. Leaving aside the vague word "defining," there are plenty of other individuals and groups that by the nature of their profession, may indeed die for us-- law enforcement, fire fighters, and EMT's in violent situations. I don't want to belabor this point because it is not a major concern of mine in this meme, but the language here is rather over the top.
Jesus Christ and the American G.I. One died for your soul, the other died for your freedom. Let's take the latter one first.
The American G.I... died for your freedom. Yes, it is true that members of the military must be ready to sacrifice their lives for the freedoms Americans enjoy. Here I am thinking of freedom not as being able to do what we want, which often leads to a trivialization of the notion of freedom; but rather freedom as having the ability because of the lack of restraint from outside forces to work toward the common good and human flourishing. It cannot be doubted that service men and women have died and given up their freedom to live in exchange for the larger freedom. There is no problem here.
Jesus Christ died for your soul. This is the most troublesome part of the meme. Yes, Jesus' death offers the possibility of eternal life, but the New Testament is very clear the salvation that comes in Jesus Christ is in toto, that is Jesus' death is not only about going to heaven, it's about the renewal of earth and all of creation. To cast Jesus' death as only about going to heaven misconstrues the gospel. Jesus' death and resurrection is the beginning of bringing heaven to earth here and now, and that salvation is concerned with everything in the world that is broken in order to reverse it. In fact, the New Testament speaks of Christ's saving work more often as what God is doing in the here and now, then what God will offer in eternity. The Bible is this world oriented. The eternity of salvation is the icing on the cake; it is not the cake, the substance itself. God cares about the poor, the marginalized, injustice, the misuse of power, greed and every other sin that diminishes God's good creation. In Jesus' death and resurrection, God is doing something about this brokenness in the here and now.
Jesus offered to die for all of us, but just not our "souls." He intends to redeem us including our bodies. That is why Jesus rose bodily from the dead. The universe is not some second-rate project only to be replaced by a first-rate heaven. In Jesus, God is bringing heaven to earth.

Then the mother of the sons of Zebedee came to him with her sons, and kneeling before him, she asked a favor of him. And he said to her, ‘What do you want?’ She said to him, ‘Declare that these two sons of mine will sit, one at your right hand and one at your left, in your kingdom.’ But Jesus answered, ‘You do not know what you are asking. Are you able to drink the cup that I am about to drink?’ They said to him, ‘We are able.’ He said to them, ‘You will indeed drink my cup, but to sit at my right hand and at my left, this is not mine to grant, but it is for those for whom it has been prepared by my Father.’
When the ten heard it, they were angry with the two brothers. But Jesus called them to him and said, ‘You know that the rulers of the Gentiles lord it over them, and their great ones are tyrants over them. It will not be so among you; but whoever wishes to be great among you must be your servant, and whoever wishes to be first among you must be your slave; just as the Son of Man came not to be served but to serve, and to give his life a ransom for many.’ (Matthew 20:20-28)

It is important to notice that in this passage, Jesus is responding to a real, this world matter-- who gets to be in power when the kingdom comes on earth. Jesus' responds with a real, this world reality of how the kingdoms of the world work in contrast to how God's kingdom will operate. Among the pagans, it
is top dog down to the bottom. Those at the top have the power and the influence. Those at the bottom hope to get some scraps from the table. But in God's earthly kingdom "it is not so among you,"-- notice the present tense. Jesus is not talking about a future heavenly kingdom yet to come, but the way the followers of Jesus are to order their life together in the here and now. They are to reflect the way of the cross in the here and now. In so doing, they are modeling for the world the in toto salvation that Jesus brings in "giving his life as a ransom for many."
Special Note: The word translated "life" in the above passage is the word "psyche," typically translated "soul." There really is no doctrine of the soul in the New Testament. That we read it into the Bible from Platonic philosophy is to misinterpret the biblical writers on the afterlife. A better word to refer to that connection we have with God is "spirit," ("pneuma") which cannot separated from the body. Thus the translators are quite correct to translate "psyche" as "life."
That leads to my final point of deconstruction. This meme implies an equal dualism, that is the deaths of soldiers for our freedom is an equal parallel to the death of Jesus for our eternity. I do not intend to minimize the sacrifices offered by our women and men in uniform who have given all, but for the New Testament, no sacrificial death comes close to embodying the significance of Jesus' death for the world. Stanley Hauerwas writes,

After 9/11, what were we asked to do? Shop! I mean, what an extraordinary thing-- that we're supposed to shop as a way to resist terrorism. Christians all over the country should have said, "Hey, that sounds pretty silly to us."

There's this extraordinary claim that September 11, 2001 changed the world. False. Christians should be saying, "No, A.D. 33 changed the world." We need to narrate 9/11 in the light of A.D. 33 and not vice versa. Nothing is more important for Christians than to demand the truth from our ministers.

Jesus' death and resurrection secure our eternity, to be sure, but it has also put in place the salvation of the entire cosmos. As St. Paul says, all of creation groans for its deliverance (Romans 8:19) and now his followers have been saved to live in the world God plans to redeem. Salvation is not about taking us out of the world (just saving our souls), but injecting the church into the world to offer healing and to be a suffering presence in this life. In the cross, Jesus took the worst that the world could do to him absorbing its violence into his life and by dying refusing to respond with violence like the pagans. And this is at least part of what Jesus means when he tells his disciples to take up their crosses and follow him (Matthew 16:24).
It is for freedom that Christ has set us free (Galatians 5:1). That freedom has been secured by Jesus Christ and it is not in need of defending by any nation, army, or soldier. If Jesus has set us free, we are free indeed! (John 8:36).
His death compares to no one else.
Posted by Allan R. Bevere at 6:00 AM