Abortion, Guns, and the Politics of Witness 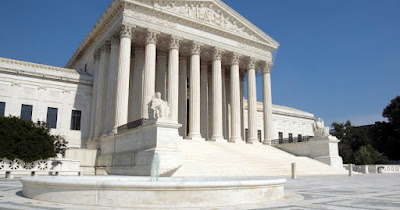 I ask the church to consider the recovery of a robust political ecclesiology that sees the very life and witness of the ecclesia as its politics, and that the primary and central political posture of the church toward the nations is not one of influence in the political chambers of Washington D.C., but by embodying in its collective life what God expects of the nations.

Considering the recent SCOTUS decisions on guns and abortion and in light of my previous post about what I think has become the idolatrous support of Donald Trump, we followers of Jesus face a two-fold problem. In order to understand what follows, you might want to read or reread yesterday's post entitled "When Pro-Life Is Not Pro-Life" here.
Again, our problem is two-fold: First, I am not calling for idealism in my post. That is a caricature. To expect our leaders to be people of high moral character is not to be an idealist. To justify voting for Donald Trump by claiming there are no perfect leaders is a lazy excuse not to think through the complex matters before us. No one expects perfect leaders. Second, the Bible does not separate moral character from good leadership. We have had eight years to see what a man of Trump's bad character has done for the nation-- eroded trust in our institutions, peddled the Big Lie, and hoodwinked one third of the American people to act based on a delusion, while lining his coffers by bamboozling his faithful followers. We are where we are today because Donald Trump is the most anti-life candidate we have had in our lifetime. This has gone far beyond issues and platforms.
Leaders are not just in power to enact what we want as if they are simply computers in which we feed our desired data in order to get our preferred outcome. Leadership intrinsically has a moral character to it that cannot be separated from actions. Liberals used to say character did not matter for good leadership (e.g. Bill Clinton) while conservatives used to believe it did. Conservatives have now abandoned that. The liberals have won the character argument. Conservatives in that respect have become good liberals. There is plenty in the Bible to reject Donald Trump's leadership, but little in the Bible to support it. I endeavor to be biblical.
In conclusion, I once again quote David Fitch. His comments embody what I believe is the politics of witness.
Yesterday I posted this statement from the great Sean Palmer:
"It is my Christianity which informs my refusal to impose my Christianity."
Then I got some push back from people telling me how I’m fine with the gov’t coercing when it comes to gun safety laws, but then I am not ok when it comes to protecting innocent life in the womb. They saw this as an inconsistency.
Look folks. I believe abortion is an affront to God’s good creation. A tragic denial of the image of God. But this is a conviction born out of who God is as revealed in Jesus. It is tied to a sexual ethic formed out of a faith and walk and trust in Jesus as ruler of the universe. And even with all that, there is tragedy in this broken life that sometimes makes abortions necessary. These commitments are made possible by a faith, trust and walk with Jesus, and so it makes no sense to enforce these convictions on people who do not believe. These convictions must be lived so that the world can see what God does in the birth of every embryo, especially the one conceived out of tragedy. God will not work through coercion to instill these convictions upon people who do not yet know Him. This is not who God is. And so anti-abortion legislation ends up being the use of worldly power to accomplish God’s redemption. When we do this, I contend bad things happen, very bad things happen.
When it comes to guns, there is something like 90% of US population that desire better gun safety laws and protections. Yet money, politics have prevented such legislation. And mass murders continue. It is not coercion when a democratic society does the will of its people. Getting behind gun legislation at this time could not be a more Christian thing to do. On the other hand, when 90% of the people want abortion rights for women, it is coercion for a minority to enforce a law on them. And so, with Sean Palmer, I agree, it is not a Christian thing to do. And, I might add, it won’t work. It will back fire.
I believe the way the church works for cultural change happens with the church living justice and working for it LOCALLY. As the ground swells with God’s good work among us, it works its way up to legislation. This is the way civil rights legislation happened. This is the way universal health care happened in Canada. This is the way the abolition of slavery happened, despite it ending in all out civil war. I could give a thousand examples.
Even with gun safety regulations in place, we still have a violent culture, more violent than any other developed country. Legislation can at best only preserve society, not redeem society. The church must be the place where we practice the reconciliation and interpersonal renewal made possible in Jesus showing the world another way out of the alienation and despair that leads to shooting people. The presence of God in the world, made manifest by the people of Jesus working locally, can bring great repentance and change and healing to our broken land.
Churches should be leading conversations that shape their people to be these kinds of people. Let's have a conversation.
Posted by Allan R. Bevere at 9:45 AM