A New Kind of King 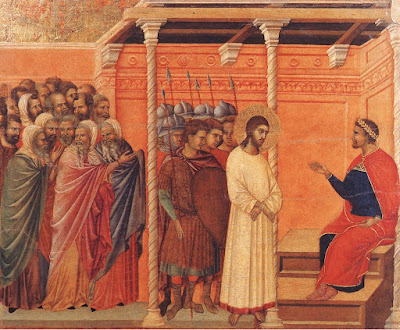 Royalty in a constitutional monarchy does not operate the way monarchs did in Jesus' day. Queen Elizabeth has influence, to be sure, and from all appearances she is universally respected; but she does not have the kind of absolute authority wielded by ancient queens and kings. When thinking about the monarchs of the ancient world, Queen Elizabeth does not compare to Herod the Great or Emperor Tiberius.
Jesus has been arrested and is standing before Pilate. He is being interrogated. For Pilate, Jesus is an enigma. Jesus stands before him accused as a revolutionary, one who is preparing to lead a violent revolt against the empire. Pilate has seen revolutionaries before. He has had his share of would-be deliverers. As Pilate sizes up Jesus, he does not seem to fit the bill. The fact that Jesus’ final act of revolution didn't even get off the ground: arrested with only a handful of followers with him, makes Pilate wonder whether Jesus was up to anything revolutionary. If Jesus was in Gethsemane organizing his revolt, he was terrible at being a Messiah. Pilate has the same understanding of violent Messianic methods as the disciples. Nope. Jesus as this kind of Messiah doesn't fit the profile.
Continue Reading>>>
Posted by Allan R. Bevere at 4:57 AM