What is The Annunciation of the Lord? 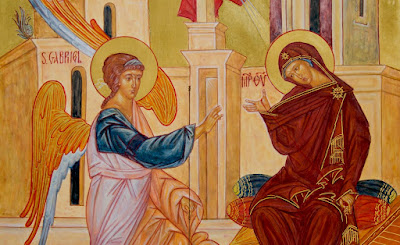 The angel said to her, "Do not be afraid, Mary, for you have found favor with God. And now, you will conceive in your womb and bear a son, and you will name him Jesus. He will be great, and will be called the Son of the Most High, and the Lord God will give to him the throne of his ancestor David. He will reign over the house of Jacob forever, and of his kingdom there will be no end" (Luke 1:30-33).
By Scott P. Richert
The feast of the Annunciation of the Lord celebrates Angel Gabriel's appearance to the Virgin Mary (Luke 1:26-38) and his announcement that she had been chosen to be the mother of the savior of the world. Also being celebrated during this feast was Mary's fiat, which means "let it be" in Latin—her willing acceptance of the news.
The Annunciation, which means "the announcement," is observed almost universally throughout Christianity, especially within Orthodoxy, Anglicanism, Catholicism, and Lutheranism.
Continue Reading>>>
Posted by Allan R. Bevere at 8:59 AM