If We're Going to Ban Offensive Books, Let's Start with the Bible 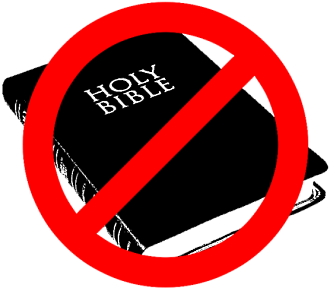 In an unanimous vote, the McMinn County School Board in Tennessee banned a novel about the Holocaust entitled Maus. According to Today.com

[Lee] Parkison [Director of Schools] said two or three board members came by his office to discuss the book and its "rough, objectionable language." One board member, Tony Allman, said in the meeting that educators "don't need to enable or somewhat promote this stuff," according to the transcript, and cited the book's author's past history of creating graphics for "Playboy."
“It shows people hanging, it shows them killing kids," he added, describing the depictions in "Maus" of true historical events. "Why does the educational system promote this kind of stuff? It is not wise or healthy."

It would be quite difficult to write about the Holocaust in an accurate way that excluded descriptions of the worst of humanity. What would happen if we censored Elie Wiesel's Holocaust recollections in his book Night? Take out the graphic descriptions and you seriously undermine the evils of the Holocaust.
I am not debating in this post the graphic and disturbing nature of the novel Maus. But it does seem odd (as someone noted on social media) that our children can't be subject to reading curse words in between having active shooter drills. Something doesn't seem right.
It is also important to mention that state representatives in Tennessee have made several attempts to make the Bible the official book of the Volunteer State, which highlights the ironic nature of irony. If Maus is a book to be kept from our children, then the Bible should have been banned first, not held up as some gold standard in children's literature. Allow me to cite just a few passages to make my point.

Now Sarai, Abram’s wife, bore him no children. She had an Egyptian slave-girl whose name was Hagar, and Sarai said to Abram, ‘You see that the Lord has prevented me from bearing children; go in to my slave-girl; it may be that I shall obtain children by her.’ And Abram listened to the voice of Sarai. So, after Abram had lived for ten years in the land of Canaan, Sarai, Abram’s wife, took Hagar the Egyptian, her slave-girl, and gave her to her husband Abram as a wife. He went in to Hagar, and she conceived; and when she saw that she had conceived, she looked with contempt on her mistress. Then Sarai said to Abram, ‘May the wrong done to me be on you! I gave my slave-girl to your embrace, and when she saw that she had conceived, she looked on me with contempt. May the Lord judge between you and me!’ But Abram said to Sarai, ‘Your slave-girl is in your power; do to her as you please.’ Then Sarai dealt harshly with her, and she ran away from her (Genesis 16:1-6).

Hey, what's a little sex with your wives "mistress" and a slave at that?

But before they lay down, the men of the city, the men of Sodom, both young and old, all the people to the last man, surrounded the house; and they called to Lot, ‘Where are the men who came to you tonight? Bring them out to us, so that we may know them.’ Lot went out of the door to the men, shut the door after him, and said, ‘I beg you, my brothers, do not act so wickedly. Look, I have two daughters who have not known a man; let me bring them out to you, and do to them as you please; only do nothing to these men, for they have come under the shelter of my roof.’ But they replied, ‘Stand back!’ And they said, ‘This fellow came here as an alien, and he would play the judge! Now we will deal worse with you than with them.’ (Genesis 19:4-9).

What is Tennessee trying to promote? Forcible rape, fathers giving their daughters to be brutalized? To quote one school board member, "Why does the educational system promote this kind of stuff? It is not wise or healthy."

I guess it's OK to keep some things all in the family.

When Israel had finished slaughtering all the inhabitants of Ai in the open wilderness where they pursued them, and when all of them to the very last had fallen by the edge of the sword, all Israel returned to Ai, and attacked it with the edge of the sword. The total of those who fell that day, both men and women, was twelve thousand—all the people of Ai. For Joshua did not draw back his hand, with which he stretched out the sword, until he had utterly destroyed all the inhabitants of Ai. Only the livestock and the spoil of that city Israel took as their booty,... (Joshua 8:24-27).

I guess Joshua and the Israelites slaughtered everyone because they were having a bad day.

When his servants told David these words, David was well pleased to be the king’s son-in-law. Before the time had expired, David rose and went, along with his men, and killed one hundred of the Philistines; and David brought their foreskins, which were given in full number to the king, that he might become the king’s son-in-law. Saul gave him his daughter Michal as a wife (1 Samuel 18:26-27).

Well, this is awkward. I wonder if Philistine foreskins were listed in the bridal registry? By the way, mommy. What's a foreskin?

Then Jesus began to reproach the cities in which most of his deeds of power had been done, because they did not repent. ‘Woe to you, Chorazin! Woe to you, Bethsaida! For if the deeds of power done in you had been done in Tyre and Sidon, they would have repented long ago in sackcloth and ashes. But I tell you, on the day of judgement it will be more tolerable for Tyre and Sidon than for you. And you, Capernaum,
will you be exalted to heaven?

No, you will be brought down to Hades.

For if the deeds of power done in you had been done in Sodom, it would have remained until this day. But I tell you that on the day of judgement it will be more tolerable for the land of Sodom than for you' (Matthew 11:20-24).

So much for gentle Jesus meek and mild. I thought Jesus was nice to everyone.

‘But woe to you who are rich,
for you have received your consolation (Luke 6:24).

Dad, are we rich? If so, Jesus says we are in trouble.
I can go on, but that is more than sufficient. I am not dismissing the authority of Scripture as the church's central authority. It is the word of God to us that reveals the decisive Word of God in Jesus. The Bible is a holy book, but it is also a human book; and because it is a human book, it tells the story of humanity in all of its sin, depravity, and brokenness. The Bible does not avoid the serious realities of our world. If it did, it could not be God's word to us. The Holocaust demonstrates the human capacity for evil. We should no more want to shield our children from that then we should cut out the same graphic portrayals in the Scripture.
The key is not to shelter our children from such texts, but guide them by putting what they read in context in order to put them on a journey of making their way through a world of sin and depravity that they might offer some goodness and virtue in their lives. We are currently in a time when some want to restrict what our children are taught because we don't want to upset them or, what is often unacknowledged, we want to tell history in such a way that makes some people not look as bad as they truly were. In so doing, we do our children a disservice. Let's include our children and youth in the conversation along with parents, teachers, and educators. We can even include politicians if they will pledge not to posture for their reelection.
If allowing our children to read the novel Maus is enabling and somewhat promoting this stuff (as a school board member said), then allowing our children to read the Bible is enabling and somewhat promoting incest, genocide, and slavery.
The logic used by the McMinn County School Board in banning graphic literature should apply to the Bible itself.
Consistency is necessary for integrity. Otherwise, it just makes some people look foolish.
___
Would you like to receive daily reflections on the day's Scripture readings? You can subscribe to my newsletter here.
Posted by Allan R. Bevere at 12:33 PM

Best response to the book banning issue I have read so far. Thanks.