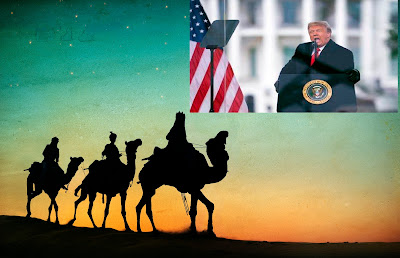 Since last January 6, 2021, two events are inextricably linked in American culture-- Epiphany and the storming of the U.S. Capitol in a failed attempt at insurrection. There will be those who think that the latter event will forever tarnish the former, and it will be so if Christians allow Insurrection Day to eclipse Epiphany. However, I believe that if we allow Epiphany to shine its light on the darkness of the Capitol riot, Christians can find guidance in understanding the Christian faith more clearly and why those Christians who involved themselves in the insurrection have embraced a distorted understanding of what it means to follow Jesus.
The Church celebrates Epiphany every January 6, which is also Christmas Day for the Orthodox Church. The Gospel reading on Epiphany recounts the story of the wise men (magi) in Matthew 2:1-12:

In the time of King Herod, after Jesus was born in Bethlehem of Judea, wise men from the East came to Jerusalem, asking, 'Where is the child who has been born king of the Jews? For we observed his star at its rising, and have come to pay him homage.' When King Herod heard this, he was frightened, and all Jerusalem with him; and calling together all the chief priests and scribes of the people, he inquired of them where the Messiah was to be born. They told him, 'In Bethlehem of Judea; for so it has been written by the prophet:
"And you, Bethlehem, in the land of Judah,
are by no means least among the rulers of Judah;
for from you shall come a ruler
who is to shepherd my people Israel."'
Then Herod secretly called for the wise men and learned from them the exact time when the star had appeared. Then he sent them to Bethlehem, saying, 'Go and search diligently for the child; and when you have found him, bring me word so that I may also go and pay him homage.' When they had heard the king, they set out; and there, ahead of them, went the star that they had seen at its rising, until it stopped over the place where the child was. When they saw that the star had stopped, they were overwhelmed with joy. On entering the house, they saw the child with Mary his mother; and they knelt down and paid him homage. Then, opening their treasure-chests, they offered him gifts of gold, frankincense, and myrrh. And having been warned in a dream not to return to Herod, they left for their own country by another road.

Epiphany means "revelation" or "manifestation." It is often used to refer to a specific event that reveals something important. On January 6, the focus is on the star of Bethlehem as a light of revelation to the Gentile wise men, and by extension all Gentiles. Epiphany affirms that Jesus has come as a light to all the nations. But as Matthew 2 informs us, not everyone was happy with the birth of this newborn king, in particular Herod the Great. Epiphany not only reveals the light of Christ, but the darkness of those who oppose him.
When his subjects referred to Herod as "the Great," it certainly was not a commentary on his moral character and integrity. Herod was a skilled politician and an eloquent diplomat. At the same time, he was insanely jealous of his position and power. He stopped at nothing to retain his authority; he tolerated no rivals. Immediately after his accession to the throne, he had the entire Sanhedrin (the Jewish ruling council) put to death. He purged the Pharasaic party of anyone who did not approve of his reign. During one purging Herod crucified as many as five thousand Pharisees outside the walls of Jerusalem. One ancient source observed that it was common to pass dozens of crosses alongside the road as one entered Jerusalem.
Any sort of suspicion, whether well-founded or not, was sufficient cause for Herod to resort to bloody deeds. Caesar Augustus said it was better to be Herod's pig than his son; for the former would likely live longer. So hated and feared was Herod by his people that he knew they would rejoice at his death. Therefore, just before his death, Herod ordered that when he died, the heads of prominent families should be executed in order that there would be mourning throughout the land. Fortunately, the order was never obeyed.
This context makes it is easy to understand why a rumor of a rival king of the Jews was bound to roust Herod's worst fears. There was no room for another king in Herod's world; yet another king does indeed enter. Matthew chapter two presents to us a tale of two kings and the conflict between them. There is Herod, the jealous tyrant, the active participant in the story, and there is also the infant king, helpless and defenseless, passive and dependent.
And that brings us to the other event of January 6th: the insurrection instigated at the hands of Donald Trump, who as I have suggested elsewhere, is a twenty-first century version of Herod. Last January revealed the darkness of a leader who like Herod had to have his narcissistic ego constantly fed by surrounding himself with sycophants and was willing to resort to almost anything to keep his hold on power. He also has spent his life responding to every grievance he has and has sought to destroy anyone who dare oppose him. And sadly, for reasons difficult to understand, there were those who followed his instructions and did his bidding on that day. And the all too uncomfortable truth we must face is that many of those insurrectionists who stormed the Capitol not only claim to be followers of Jesus, and have embraced a form of Christianity that Jesus himself would not recognize. They rejected the way of wisdom to follow another Herod.
One of the truths that has become obvious to me over the past few years is that those who most strongly claim that the Bible is their central authority tend to be the same persons most untethered from the biblical text in their way of life. They talk a good line when it comes to the Bible, but the things they cherish the most are not embraced by the biblical text. The one thing Jesus spoke out against the most was the hypocrisy of the religious. It should be obvious that the failed insurrection attempt a year ago was an obviously unchristian event, but the obvious is not so obvious to many.
On this Insurrection Day and on this Day of Epiphany, the latter stands as a direct judgment against the former and shines a divine light on the darkness that resides even with the religious who continue to side with the Herods of the world, ancient and modern.
Epiphany has nothing in common with insurrection.
Posted by Allan R. Bevere at 10:35 AM