What Color Is Your Jesus? Or, We Don't Own Jesus. 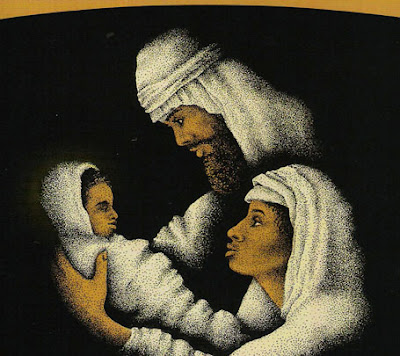 Many years ago, I traveled to Haiti on a short-term mission trip. Near the end of our time there, the missionary hosting us (Dave) wanted to show us some of the sites of the country's capital, Port-au-Prince. At one point, we stopped at an old Presbyterian Church downtown. Dave wanted us to see the beautiful sanctuary, so we entered taking in the ornate architecture and the beautiful artwork.
The sanctuary had a stations of the cross that went around the inside walls. At each station, a mural had been painted depicting each station. What I was not prepared for was that at each station, Jesus, his disciples, and the other character painted were all black. I had never seen a black Jesus before. After all, I had lived in a context where every depiction of Jesus was basically white. It never even occurred to me that Jesus may have had a complexion other than the average white European.
My white context had made me ignorant. I was ignorant walking into that church in downtown Port-au-Prince that day, never considering that Jesus might have been something other than white. After all, how many nativities do we see each holiday season on front lawns and public places and in retail stores, where the holy family is not depicted as lightly complected? So, it is not surprising that the average person in the United States would never consider Jesus as anything else ethnically.
But, there can be little doubt that Jesus was not fair complected. He was not European. He was a Semite of Mediterranean descent. While it is impossible to know how dark Jesus' skin happened to be, it is certain he did not look like he was from Finland. If for no other reason than for the sake of history (and there are other important reasons as well) we need to be aware of this.
But, I also want to make a theological point here because history and theology are always intersecting and intertwining with each other. As I looked at those murals that day considering a very different looking Jesus than the one I knew, it made sense to me that in Haiti, Jesus would and should be depicted as Haitian. Jesus came to earth for the Haitian people. I've seen nativity sets from Japan where the holy family is depicted as Japanese. That may not be historically accurate, but it is most definitely theologically correct. Jesus came to earth for the Japanese people as well. There is a song we hear this time of the year that says it better than I:
Some children see Him lily white
The baby Jesus born this night
Some children see Him lily white
With tresses soft and fair
Some children see Him bronzed and brown
The Lord of heav'n to earth come down
Some children see Him bronzed and brown
With dark and heavy hair
Some children see Him almond-eyed
This Saviour whom we kneel beside
Some children see Him almond-eyed
With skin of golden hue
Some children see Him dark as they
Sweet Mary's Son to whom we pray
Some children see him dark as they
And, oh they love Him too
The children in each different place
Will see the baby Jesus' face
Like theirs, but bright, with heavenly grace
And filled with holy light
Please hear me. I do not want to be misunderstood. Let me say again. History is important. It is important that we make it clear that white European depictions of Jesus are not historically accurate. And for those of us who are not part of an ethnic minority, and who have not had to live in a context where we are a minority, we need to think twice before instructing ethnic minorities on how they should react and respond to the characteristic depictions of Jesus who looks like the white majority.
But having said that, I also want to say that in the midst of this all important discussion that we make sure it does not degenerate into a power struggle as to who gets to own Jesus. Regardless of the color of Jesus' skin, no one can own Jesus ethnically. Regardless of what Jesus says, no one can own Jesus politically. How true it is that we are constantly trying to manipulate Jesus to serve our own agendas, but Jesus will not conform to our expectations, our ideologies, and our wants and desire. Jesus comes to us for us, all of us, as the children's song goes, "red, brown, yellow, black, and white"... and I would add rich and poor, Republican and Democrat, capitalist and socialist. We do not own Jesus.
Jesus owns us.
Posted by Allan R. Bevere at 7:00 AM

Very well said. Jesus did indeed come for all people, and we need to
remember that he does not look like the "white majority."