A Layperson's Guide to the Feast of St. Nicholas 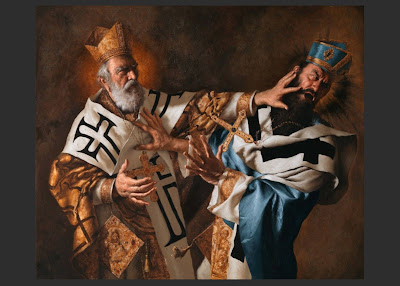 Yesterday (December 6) was the Feast Day of St. Nicholas. For those of you who have friends on social media who are theological geeks, you no doubt have seen and will continue to see memes posted today that the average (and sane) person may not understand. We do this every year because it is one of the few times annually we get to display our "deep" sense of humor ("deep" in this context meaning, "Huh?"). When you see these memes, I invite you to refer to this post throughout the day for clarification. 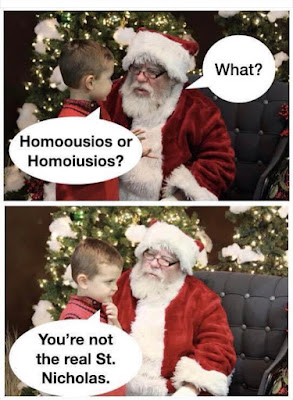 Homoousios/Homoiousios: When you encounter these two words in a meme, in which a little boy sitting on Santa's lap declares he's not the real St. Nick because he doesn't know what they mean, here's the reason. The First Church Council of Nicaea, which met in 325 AD, debated the question of Jesus' divinity. Was Jesus of "like" substance (or essence) with the Father (homoiousios) or was he of the "same" substance (or essence) with the Father (homoousios). The difference in these words is one letter (iota; the Greek equivalent of the letter i). The Council determined that Jesus was the latter and not the former. I know some of you are thinking this was an awful lot of nothing to bring bishops from every corner of the empire and spend a lot of money to argue over one little letter. Well, even today, we spend a lot of money to gather people from all over for mostly nothing (we call them conferences) While there is not enough time to explain the substance of the controversy ("substance," see what I did there?), trust me when I say that the question was of immense importance.
Bishop Nicholas of Myra, as he was known to his friends prior to moving his episcopacy to the North Pole, was present at the Council. So, any Santa sitting in the mall who does know what homoousios means is an imposter and you need to get your kids away from him as fast as you can before he turns your little angel into a heretic (that's a friendly PSA from Yours Truly). 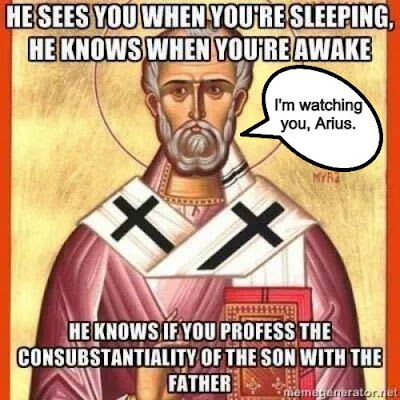 Consubstantiality: Basically the Latin synonym for homoousios (see above). 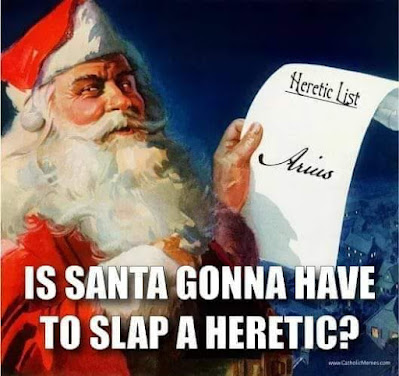 The Nicholas/Arius Smackdown: You will also see memes today that suggest there was violence at the Council started by the Jolly Old Elf... er... Bishop himself. According to the story, Bishop Nicholas, who held what became the orthodox position because the Council declared that Jesus was homoousios (see above) took umbrage (I don't get to use that word often) at Bishop Arius who took what would become the heretical position of homoiousios (see above). At some point during the proceedings (perhaps on a ouzo break), it was reported that Nicholas expressed his displeasure at Arius by punching him in the face (proof that jolly people are not always so).
It is the case, however, that there is no evidence this incident ever took place at Nicaea, but it needs to be understood that excitement is rarely present at any modern day theological symposiums. When giving papers at a conference, there is certainly disagreement and every now and then some obtuse name-calling, but nothing as dramatic as a fight among well-dressed, near-sighted scholars. I think the reason many post these memes on Nick's Feast Day is because it would be the most exciting and dramatic event of their uneventful bookwormy lives. They could then talk about it over coffee (no ouzo) at faculty meetings. "Do you remember what you were doing when the Great Fight of 2021 in San Antonio broke out?
In any case, I hope this helps. You may still not understand the importance of all of this for some of us, but I ask you to humor us. When you see these memes, please like them or post a laugh emoji, or post a comment along the lines of "That's the funniest thing I have ever seen!" If you truly want to make our day, share the meme with your friends on social media. Then we will have something to brag about in the faculty lounge.
Thank you for your time.
Posted by Allan R. Bevere at 8:26 AM