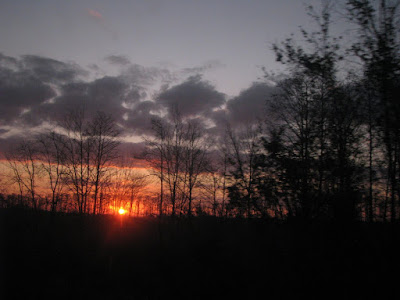 There is too much noise in our world. You walk into a restaurant for lunch and the music is blaring. The car next to you at the traffic light has the radio turned up so loud you can hear the music even though his and your car windows are closed. The first thing many of us do in the morning is turn on the TV to get the news we missed overnight or we turn on the radio while in the shower (placed on the sink far away from the water, of course). Our young people can't even enjoy a walk down the street with their thoughts because their ears are plugged into their phones. Silence is in short supply.
I'm no different. It had been my habit for years to turn on the morning news to get the latest headlines and (in the now continual 24/7 news cycle) to listen to the talking heads drone on and on repeating themselves once again every hour. I'm so used to noise that it almost seemed that by default I had to engage with the larger world of static as I came to consciousness from a night's rest.
But I changed my routine some time ago. I rise every morning at 5:30, put on coffee, sit on the patio just before sunrise and say the Daily Office. After about fifteen minutes of devotions, I get my coffee and listen to the soft sounds of the morning-- the chorus of insects softly humming to be joined by a few birds as daylight encroaches upon the darkness, to be interrupted now and then by the neighbor's dog barking briefly. Instead of being jerked into the daily reality of geo-political happenings first thing in the morning, I am greeted to a new day by sounds of creation waking from its nightly slumber.
I don't miss the news in the morning. I will become informed soon enough. But for now, in the soft sounds of the morning, I am reminded that the world is larger than the larger world. Global human happenings, as large as they are, are still much smaller than the vast Creation-- a small portion of which resides just outside my door. George Eliot wrote,

A human life, I think, should be well rooted in some area of native land where it may get the love of tender kinship from the earth, for the labors men go forth to, for the sounds and accents that haunt it, for whatever will give that early home a familiar unmistakable difference amidst the future widening of knowledge. The best introduction to astronomy is to think of the nightly heavens as a little lot of stars belonging to one's own homestead.

The Psalmist sees a divine connection in the start of a new day:
Let me hear of your steadfast love in the morning,
for in you I put my trust.
Teach me the way I should go,
for to you I lift up my soul (143:8).
To be reminded of such divine love at the start of a new day is much easier listening to the soft sounds of the morning, than encountering the clutter and the mess of a complicated world first thing after daylight that will come upon us soon enough.
I enjoy the silence of the dawn.
Posted by Allan R. Bevere at 6:00 AM