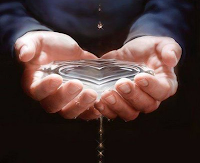 1 Samuel 15:34 - 16:13
No doubt, the people of Israel got a real surprise when David was anointed king over Israel. No one was surprised that Saul was anointed king. He was tall and good-looking; an imposing figure on the battlefield. When he was anointed, the people in great certainty affirmed that the right man had been chosen, shouting, "This is our king!" But this was not the way it was with David. When he finally stands before the people, they are probably asking themselves, "Is this our king?"
As Samuel prepares to go the family of a man named Jesse, God advises Samuel of words that should have been heeded when Saul was anointed, "Do not consider his appearance or his height, for I have rejected him. The Lord does not consider important the things humans think are significant. Human beings look at the outward appearance, but the Lord looks at the heart."
When Samuel reaches the home of Jesse, a ritual begins in which each of his sons is paraded past Samuel. Abinadab, who is the oldest and, therefore the expected choice, is not the one. This no doubt surprised those standing around who lived in a culture where it was customary to crown as king those of first-born status. But as each son stands in front of Samuel, each son is rejected. Samuel knows that God has not chosen any he has seen.
There must be another. Samuel inquires of Jesse. Yes, there is the youngest, but he is tending the sheep. Jesse didn’t even consider that David might be the choice. He was likely in his late teenage years and unlike Saul and David’s brother Abinadab, he did not look the part of a monarch.
But Samuel is adamant. David must be brought before him. As David arrives, the description given by the biblical writer reveals why his own family did not consider him to be a candidate. "He was ruddy, with a fine appearance and handsome features." Most English translations do not capture the implications of the Hebrew. Although the language is somewhat vague, a better way to translate this conceptually was the David had a fair complexion, with beautiful eyes, and he was pretty. Now having a fair complexion would not be considered out of the ordinary in Scandinavia, but in a Mediterranean and Semitic culture, he would have stood out as quite different. In addition, the reference to his eyes and his appearance suggest to us that David’s feature were almost feminine. His looks were soft and slight. Some translations may read that David was handsome, but it is more correct to say that he was almost pretty, which is not something any man wants to hear about himself. Many years ago, Hollywood made a movie about King David, with Richard Gere, playing the main role. The real King David did not look like Richard Gere!
But God does not look upon the appearance. The people looked upon Saul’s appearance and considered him fit for the job; now they look upon David’s appearance and wonder what God is thinking. God removed his approval from Saul because of Saul’s unfaithfulness to God and to the covenant; David will reign, not in perfection, but in sincere faith. He will become, as the Scripture tells us, “a man after God’s own heart.”
What we so often think and what we so often mark as the measure of a man or women can be deceiving. It’s not that we are always wrong about people and their abilities, but we know that too often our judgments about people are based more on what we perceive than what we actually know. Our evaluations of others can be so superficial. But God gets to the heart of the matter. David did not look like a king, but God knew that he had the heart that was fit for a king of Israel. And throughout his reign David would demonstrate the truth of what God knew. Long after David's death, and prior to the birth of Jesus, the people of Israel, her leaders, and her prophets would hold up King David as the standard for faithful rule, and he would be the template for that new king, the Messiah, the Anointed One, who would come to restore Israel's fortunes once and for all.
___
from Allan R. Bevere, The Character of Our Discontent: Old Testament Portraits for Contemporary Times. Energion, 2010.
Posted by Allan R. Bevere at 6:00 AM