The (Extra)Ordinary Work of the Spirit: A Lectionary Reflection on Acts 2:1-21 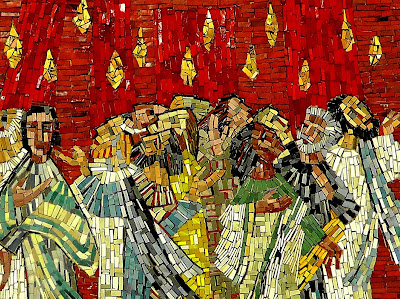 Acts 2:1-21
They were just ordinary individuals from ordinary parts of the Roman empire-- "Parthians, Medes, Elamites, and residents of Mesopotamia, Judea and Cappadocia, Pontus and Asia,Phrygia and Pamphylia, Egypt and the parts of Libya belonging to Cyrene, and visitors from Rome, both Jews and proselytes, Cretans and Arabs" (2:9-10).They were there for Pentecost, the Feast of the First-Fruits. Pentecost was celebrated every year, an important feast, but celebrated as if each year was extraordinary.
But this year, Pentecost would take on a truly extraordinary life of its own.
Jesus told his followers-- wait in Jerusalem and pray-- until the power from on high comes upon you. Some of them must have been skeptical.What power? Will this come through the power of prayer? We've prayed before. So often our prayers have gone unanswered.
Then came the wind and the flame and these ordinary disciples, these Jesus-followers from Galilee overcame their cowardly ways and ran out into the streets like drunken and courageous men shouting about the mighty works of God in Jesus Christ.
Indeed, there were Jews there that day from every nation under heaven hearing the mighty works of God proclaimed. Some charged that they were filled with the new wine of fermented grapes, but those in the know knew they were filled with the new wine of God's Spirit.
Simon Peter, the one who denied Jesus three times the night before Jesus' crucifixion stands up as one who now gets it. "People of Jerusalem, these men are not drunk. It's only nine o'clock in the morning. The bars haven't opened. Nope. The Prophet Joel spoke about this long ago. In the last days I will pour out my Spirit on all people.  Your sons and, yes, your daughters will preach. Your old men, will see visions and your young men will dream dreams."
The extraordinary work of God will now be revealed among his ordinary people.
And all who call upon the name of the Lord will be saved.
The adventure continues....
Posted by Allan R. Bevere at 6:00 AM