History Refracted: Blurring the Line Between Remembrance and Commemoration 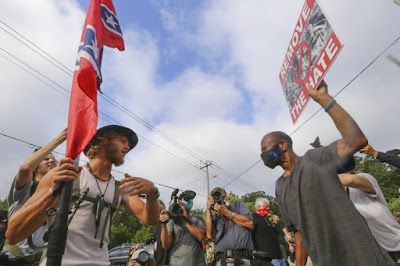 In the United States, we are currently in a time when the argument over the telling of history has become quite controversial. The story of history by necessity is selective as it is impossible to recount every event worth remembering. One of the important tasks of the historian is to discern what historical events to tell, what happenings and persons involved best get to the root of an accurate portrayal of the past moments. If one were to write a historical survey of the United States in the nineteenth century, it would be an incompetent portrayal of that time to leave out the Civil War. No one would disagree. But from there what to include and exclude gets murky. The Battle of Gettysburg? Yes. Lincoln's assassination? Yes. Devoting a large section of material to slavery? Absolutely! What about including an entire chapter on Jefferson Davis, President of the Confederacy? Probably too much, although he should not be ignored. Save the specifics for a biography. How about the fact that Siamese Twins were almost drafted to fight for the Union? Interesting trivia, but probably not.
Now, if someone embarked on a project to write solely on the Civil War itself, there would be more details included that would not make it into a nineteenth century survey. If the author was going to write two volumes instead of one, there would be even more stories to tell than a one volume work could hope to provide. Part of the process of good research is to make decisions concerning what to include and what to exclude. It's a process of discernment and judgment. Not all historians will agree on what lesser details to tell and how in depth to narrate certain events, but the point is clear: telling the story of history is always selective and some selections are better than others.
So, my use of the term "all" in the title of this post is somewhat misleading. Here it refers to the truth that while history should be remembered, not all of what is remembered should be commemorated. I think most reading this would agree that we need to remember the names of the perpetrators of 9/11, but we shouldn't commemorate their heinous act with statues of them at Ground Zero in New York City, although there are Islamic extremists who will celebrate them as heroes. All history, to be sure, is told from a point of view.
And now to the point at hand. Georgia Representative, Marjorie Taylor Greene has stirred up a commotion comparing the requirement to wear COVID masks in the House of Representatives as equivalent to Jews having to wear identification arm bands in Nazi Germany. It is a nonsensical and dangerous comparison. One hundred years from now when historians write about the COVID pandemic of 2020-2021, no historian will look back on this time and make such an ignorant claim. Undoubtedly, the resistance to masks in this time will be included in the telling of COVID, but the Holocaust comparison won't come close to making the final cut, other than possibly telling the brief story of an unhinged Congresswoman making the crazy correlation (won't her grandchildren be proud).
Something even more distressing is that prior to her election to Congress, MTG is on video telling a City Council meeting that she wouldn't remove statues of Hitler or Satan in order to teach her children what they did. Hopefully, she has enough critical self-reflection to backtrack on that claim, but her outrageous comments reveal the blurring of the line between remembrance and commemoration which is, in this current moment, prevalent among persons more rational and intelligent than Greene.
The removal of Confederate Monuments is not a denial of history, nor is it example of cancel culture; rather the practice is based on the correct telling of history that while the Confederacy needs to be remembered, it does not need to be commemorated. Indeed, these "Jim Crow monuments" as I like to call them were erected to tell a different and false story of the Confederacy, one that pushed slavery into the background as THE cause of the Civil War in favor of a more benignly false understanding of the Confederacy as simply fighting for states rights. To remove these monuments is to reject that false narrative.
When we remove the symbols of our racist history from monumental status to displays in museums, we are not denying our history, but putting them in their proper context. As displays, they tell the story of who we were; as monuments they proclaim who we still want to be. As displays they remind us of the values that our ancestors embraced; as monuments they continue to proclaim those values as somehow still important. When a community places a monument in public, it is a declaration of what the people who put it there value. No one should be duped into believing that a monument in public makes no moral claims. When communities continue to embrace those monuments, they are affirming the values of those who put them there in the first place. We must remember all of this, but refuse to commemorate it. Joshua Zeitz rightly notes,

In Germany, you won't see neo-Nazis converging on a monument to Reinhard Heydrich or Adolf Hitler, because no such statues exist. The country long ago came to grips with the full weight of its history. But you'll find Nazis and Klansmen in Virginia, circling a statue of Robert E. Lee, a traitor who raised arms against his own country in the defense of white supremacy.

Yes, we must remember Robert E. Lee. Tell his story, put his artifacts in museums, but do not commemorate him with a monument in the town square. And while there are no statues of Adolf Hitler in Germany, every German child knows his story and the details of that dark time. To never forget is an intentional act
And it's not just Confederate monuments. The recent moves by some state governments to suppress the teaching of Critical Race Theory is not over a healthy debate about race in American society; but is a new kind of attempt to resurrect a different version of Jim Crow, one that does not support a return to physical segregation, but one that segregates the truth of the continued implications of racism from American history. It promotes the mythology of America as a Christian nation in order to treat slavery as just an unfortunate hiccup that black Americans need to quit dwelling on in the twenty-first century. After all what's a little human bondage among friends?
It should not be a surprise that the descendants of nineteenth century secessionists are at the helm of this new twisted incarnation of Jim Crow. The mythologies at the heart of our identities so often serve as cover stories to an identity we have manufactured to insure our pride and comfort. Those mythologies cannot be demonstrated as the lies they are without a project of intentionally-instilled amnesia forced upon our children. The Republican governors signing such legislation are not debating how history should be told, but are mandating that the stories they find uncomfortable be cancelled out of the curriculum. Why? Because one cannot continue to commemorate Confederate history if we remember in detail the horrors inflicted by two hundred and fifty years of slavery, a treasonous rebellion by states that led to over 600,000 deaths, a century of Jim Crow, and the continued struggle against the racism embedded in American society. It is a continued blurring of the line between remembrance and commemoration that cannot be accomplished when the truth of history is told. Over one hundred and fifty years after the Civil War, the spirit of the Confederacy is  alive and well.
Nathan Bedford Forrest would be proud.
Posted by Allan R. Bevere at 6:00 AM