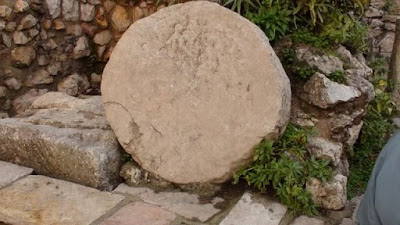 John 19:38-42
Some things are done carefully and secretly out of fear. In our reading from John we are told that Joseph of Arimathea was a secret follower of Jesus "for fear of the Jews." ("Jews" here refers to the religious leadership in Jerusalem, not the Jewish people in general. Joseph himself was a Jew.) And yet, in our reading Joseph takes a step out of the shadows and confronts his fear to ask Pilate for Jesus' body. That Jesus would be buried was not a foregone conclusion. The Romans often denied burial of those executed by the state as one more warning to future revolutionaries. "Try it and not only will you be brutality and painfully killed, but we will let the birds and wild animals take care of what's left." But with Joseph's intervention, a burial place is secured for Jesus' body. That Pilate granted Joseph's request may have been one way to poke at Caiaphas, the High Priest whom he detested and would not have wanted Jesus buried.
Joseph and Nicodemus make their way to a new tomb possibly owned by Joseph's family. John indicates that the tomb was in close proximity to where Jesus was crucified. In visiting the traditional sites of Jesus' execution and burial today, one discovers that they are close by, one indication among others that they are indeed the locations of these sacred events.
If Jesus was a king than his burial befitted a king. John writes, "Nicodemus, who had at first come to Jesus by night, also came, bringing a mixture of myrrh and aloes, weighing about a hundred pounds. They took the body of Jesus and wrapped it with the spices in linen cloths, according to the burial custom of the Jews" (19:39-40). The small amount of spikenard Mary used to anoint Jesus' feet (John 12:1-11), which amounted to almost ten months wages was a pittance compared to the cost of the anointing oils and spices used to anoint Jesus' body.
Joseph of Arimathea was not the only one to have his fears. Earlier in John's Gospel, Nicodemus approaches Jesus at night. (John 3:1-21) We are not told why he comes under the cover of darkness, but as a member of the religious leadership, perhaps he too is afraid to be seen in intimate conversation with Jesus. While we are not given details of their work in caring for their dead friend in his burial, it would not be surprising if they worked in silence. After all that has happened in the short span of a few hours, what is there to say? The authorities are firmly in control. Nicodemus and Joseph had put their hope in Jesus; and in the fulfillment of their hopes. Perhaps they believed Jesus would quiet their life-long daily fears, but now they were fearful once again. And those fears were too great to be made worse by bringing them to the surface in conversation. They needed to be buried deep inside as they buried their friend. Perhaps, at best, all they could muster were a few prayers as they worked, a few words of Psalm-like lament to be whispered only in that quiet cemetery.
The tumult of Good Friday is over. There has been much noise; but now on this Holy Saturday silence is the only response. After all that has happened what is there to say? There is an ancient Holy Saturday liturgy that begins,

But just because the King is silent does not mean he is not still working on our behalf. That ancient liturgy continues,

Jesus has gone to search for Adam and Eve, our first parents, as for lost sheep. Greatly desiring to visit those who live in darkness and in the shadow of death, he has gone to free from sorrow Adam in his bonds and Eve, captive with him-- He who is both their God and the son of Eve.

This Saturday, in-between the shrieks of crucifixion and the victorious shout of resurrection, is a holy day of silence. So, let us rest on this day and say our prayers. At most, let us whisper; for we will need our strength for tomorrow.
The shouts of victory are about to begin.
Posted by Allan R. Bevere at 6:00 AM