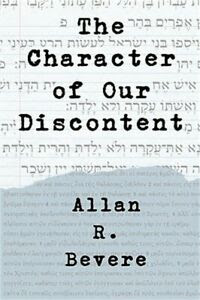 Now is the winter of our discontent made glorious summer by this son of York.-- William Shakespeare
These well known words from Richard The Third, quoted often while ignoring the context of Shakespeare's drama* is nevertheless an appropriate depiction of the human struggle to live faithful lives and lives of character in the midst of challenging times. John Steinbeck in his novel, The Winter of Our Discontent, deals with the struggle of living morally, especially when such behavior works against one's fortunes. Human beings are indeed discontented people.
But a word that better describes our discontent is not "winter" but "character." If we human beings are honest, we will admit that often our dissatisfaction in life is a matter of who we are. As C.S. Lewis rightly notes, the problem with people is not that they desire, but that they desire the wrong things. The Apostle Paul may have found that he was content in every situation (Philippians 4:10-13), but few other individuals can honestly say the same. Christians know all too well that while St. Augustine's dictum that our hearts are restless until they find rest in God is true. Even in the midst of finding rest in relationship with the divine, there is still plenty of discontent as believers journey toward perfection. We are discontented because we lack, and often we are not sure what we lack nor where to find what we truly need. Indeed, too often what we think we need is not what we truly need. Character is not something Christians receive instantaneously at conversion; it takes a lifetime of forming and shaping as God works to restore his image in us. We may be in the image of God, but that image is cracked. Jesus wants his followers to become what they are, but the becoming is not easy.
The biblical characters often found themselves dissatisfied. Sometimes they struggled with the call of God wishing it would go away. At other times, the call itself was not the problem; how to be faithful to it was the issue. But in the midst of the all too human struggle with the discontented nature of their existence, the subjects of concern in the Bible speak to the same journey faithful disciples travel at the dawn of the twenty-first century. If we look closely at the joys and sorrows, the triumphs and the tragedies of the biblical characters we will be able to see ourselves in their lives as well.
The Bible knows us because, as Augustine also said, God knows us better than we know ourselves.
___
*In context of Richard The Third, the quote is one which states that the winter of discontent is over. Most of the time the "now" is interpreted to mean the exact opposite-- that Richard, the character uttering the words, is complaining about their want, when he is celebrating a reversal of fortunes and better days.
___
From Allan R. Bevere, The Character of Our Discontent: Old Testament Portraits for Contemporary Times.
Posted by Allan R. Bevere at 6:00 AM