Living in the Time Between the Times 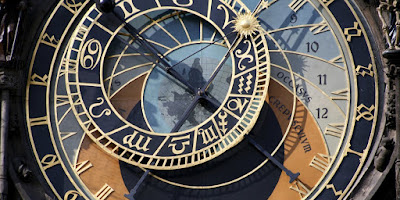 I find the week between Christmas and New Year's to be an interesting time of the year for me. The mad rush and hubbub to prepare for the celebration of December 25th basically comes to a halt. I do not participate in the insane nonsense of rushing to the stores on December 26th for the purpose of standing in long lines to return the gifts I received. I have the same revulsion to December 26th as I do the day after Thanksgiving. And our New Year's celebration is usually very low key. I don't understand the value of bringing in another twelve month cycle with inebriation and embarrassing behavior. In this week I will attend to my responsibilities after the Christmas holiday, but things still are not back to "normal" for me. This is one week when the church will have no committee meetings, nothing of critical importance will take place unless, of course, it is an emergency. This is a week that just feels different.
But even though my welcoming of the new year is quite tame, I do have a sense of anticipation for what is to come, just as I am thankful for having journeyed through another year. We have finished with one major celebration and we now look to another one; and this week is a time to look back and to strain forward to see over the horizon of what is to come. It is a week that feels like a time of transition for me-- looking in one direction and then another. Christmas and New Year's are the bookends that frame the shelf of events that will take place this week.
The New Testament consistently claims that we Christians live in the time between the times. Our identity, who we are, is intrinsically bound up with what God has already accomplished for us in Jesus Christ, and we look toward God's final fulfillment of his promises as all things are once and for all finally reconciled in God's own good time. What has already happened makes it possible for us to journey in the here and now in the resurrection life (Colossians 3:1-3) and anticipate that resurrection in its fullness which has yet to happen. We look backward and forward, in one direction and then another. Both past and future come together in the present with the one constant of God's presence with us along the way.
Living in the time between the times we experience the tension embodying kingdom citizenship in our present space that resists God's kingdom come. We do not live with one foot in God's kingdom and the other in the kingdoms of the world. The Sermon on the Mount is meant to be lived in the here and now, but it cannot be fully obeyed unless we posture ourselves completely in the divine reign while confronting the current age with the Lordship of Jesus Christ, as we live as God's kingdom citizens in the present time between first and second Advents. Thus, it should not be surprising that we can, rather often, feel a sense of exile in these times, as if the church is more of an outpost in enemy territory than an established colony. But what God has already accomplished in Jesus Christ some two thousand years ago firmly establishes Christ's church as a colony in this world, though still in enemy territory. Thus we can live in the here and now as if God's kingdom has already come in its fullness and we look with confidence to the future that God will bring its fullness to pass in his own good time.
In this time between the times, we look backward and forward, we glance in one direction and then another; and seeing what God has already done, we trust in the words of St. Paul that no eye has seen, and no ear has heard, nor has any human heart conceived what God has prepared for those who love Him (1 Corinthians 2:9).
Posted by Allan R. Bevere at 5:00 AM