Discipleship in the Current Age: John Wesley and the Sermon on the Mount

First, Wesley suggests that Jesus' teaching in Matthew 5-7 focus on showing the way to heaven. He says this not only from the context of the Sermon, but because of the one preaching it-- "From the character of the Speaker, we are well assured that he hath declared the full and perfect will of God." The character of the one proclaiming means that the words spoken are "true and right concerning all things." Wesley is placing the Sermon in the larger Nicene-Chalcedonian theological context. Jesus' words are true and right because the one speaking the words is divine.
Second, Wesley clearly rejects any suggestion that the Sermon on the Mount was meant only for the current generation of people to whom the words were originally spoken, nor are they words meant only for future generations in an eschatological context. The sermon was meant for "all the children of men; the whole race of mankind; the children that were yet unborn; all the generations to come, even to the end of the world...." He offers the following reasons for his contention. 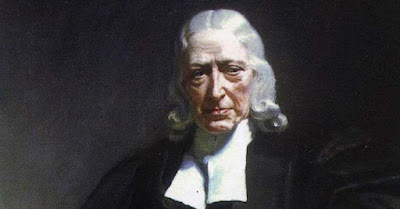 1. If Jesus had meant the teaching to be only for his twelve apostles, he would not have preached this sermon publicly and on a mountain. A private home would have been sufficient. When Matthew says that the crowd gathered and his disciples came to them and Jesus began to teach them, "them" does not refer only to the Twelve, but to the entire crowd that gathered to listen.
2. The words of the Sermon itself make it clear that Jesus was preaching to everyone. Wesley writes, "No man, for instance, denies that what is said of poverty of spirit relates to all mankind." How is it, for example, that only some of Jesus followers are to be the salt of the earth and the light of the world? How can it be that only a future generation of disciples can be guilty of murder in their hearts or commit adultery in their lusts? For Wesley, the very character of Jesus' instructions makes it clear that these are words meant for all disciples for all times and places.
There appears to be some confusion in Wesley's first sermon on Matthew 5-7 when he insists that these words are for "all mankind." Does he mean all persons, even those who are not disciples? That could be the case depending upon how one interprets his words, "all the children of men; the whole race of mankind," but yet Wesley's exposition of the Sermon also seems to suggest the requirement of Christian conversion. For example, he states,

Some have supposed that he designed, in these [the Beatitudes], to point out the several stages of the Christian course; the steps which a Christian successively takes in his journey to the promised land;-- others, that all the particulars here set down belong at all times to every Christian. And why may we not allow both the one and the other?

Could it be that Wesley sees the Sermon on the Mount as teaching that can draw the unbeliever toward salvation, while the instruction itself is for those already on the way to salvation?
3. The Sermon on the Mount for Wesley is indeed Christian morality. He observes of Matthew 5-7 that "Christianity begins just where heathen morality ends." There is a decisive and in some cases unique character to Jesus' instruction. Wesley notes, for example that when it comes to poverty of spirit "the whole Roman language... does not afford so much as a name for humility."
It is this decisive character of the Sermon on the Mount that forms the church to be a city set on a hill. And for Wesley that light is to shine from Jesus' followers in every generation.
Posted by Allan R. Bevere at 7:17 AM