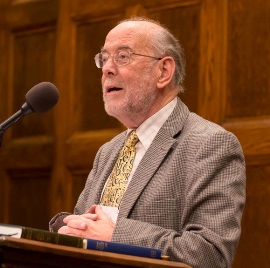 I first met Jimmy Dunn face-to-face in October of 1991. We had been conversing by letter in the days before email for several months about coming to Durham University as one of his doctoral students. And now I sat in his office for the first time to begin my work.

After all the pleasantries of meeting for the first time, we began conversation. I initially wrote to Jimmy of my interest in New Testament ethics, particularly of my desire to do something focused on Christology and ethics. I had just finished a Th.M in theological ethics from Duke University under the supervision of Stanley Hauerwas, and I shared Stanley's concern at the time that there had not been enough interdisciplinary work on the relationship between the New Testament and ethics as a mode of theological reflection (that has long since been corrected). Too many treatments of New Testament ethics were overly formal focusing on ethics as decisionism lacking reflection on questions of identity and character. Jimmy was very interested in the topic so we began to outline my work for the next few months.


During that first meeting, Jimmy grabbed two books off his desk and threw them at my feet. "Have you seen these?" he asked. They were two recently published treatments of New Testament ethics in German. I had not seen them. My first assignment was to slog through both volumes and they would be the topic of conversation at our next meeting. At that moment, I knew I had fallen into the deep end of scholarly research with James D.G. Dunn. I was very grateful for his rigorous work and that he required that rigor from his students. It was because of his high expectations that my doctoral thesis,  Sharing in the Inheritance: Identity and the Moral Life in Colossians was published in 2003, the year of Jimmy's retirement. Without him and the critique of my examiners, Loren Stuckenbruck and John Barclay, my work would be hidden on the shelf of a library in northeast England.

Jimmy was a thorough researcher as is clearly indicated in his many published volumes. He was fair to different perspectives and he knew those perspectives engaging them thoroughly. He followed the truth wherever it led and he was not afraid to take a position contrary to the consensus of a particular theological camp. His theology was not easily categorized other than to say it was Christian.

After Jimmy's retirement he continued writing and publishing. Between 2003 and 2015, he published his massive three volume series on Christianity in the Making, each volume containing over 1000 pages of extensive research on Christian origins from Jesus to the end of the second century. No one word adequately describes this series. Perhaps it can be said to be a distillation and expansion of the work of his career. It is not only a rehearsing of previous work, but a revisiting, revising, and refinement of the focus of his attention throughout many years of research from a scholar who was continually inquiring and questioning even his own positions. Each volume is a feast of information with the footnotes of each book offering additional volumes of clarification and refinement of the arguments. Anyone wanting to swim into the ocean of scholarly work on Christian origins will not be able to ignore the work of James D.G. Dunn.

Jimmy was a family man. He adored his wife Meta, who I often heard him refer to as "his flower." He loved his three children and grandchildren. Jimmy and Meta treated his students as family hosting them for dinner and gatherings. I remember the one evening they invited Carol and me to join them for dinner at St. John's College. Jimmy was preaching at a chapel service that evening. We joined them and Anthony Thiselton and his wife for dinner. It was a wonderful evening in which I felt so blessed to have been given an opportunity to be invited into the presence of people who, up until recently, I only admired from afar.

One of the most anticipated events that developed over the years was the annual Dunn gathering at the Society of Biblical Literature Conference in November. Jimmy was an annual attender in whatever American city was hosting, so some of us current and former students started gathering with Jimmy for dinner. The first gatherings were informal and small. The first year there were perhaps four of us, but over the next few years it grew until we had to find a room to reserve at a local restaurant as between students and spouses and other friends, the numbers had increased into the twentys and thirties. One year a bus was rented to get us to and from the restaurant.

Each year Meta and Jimmy would make the rounds at every table catching up on the previous year's news. They delighted hearing of our happenings both academic and personal. On a few occasions, after dinner we played musical tables. Jimmy and Meta stayed in their place and every few minutes we would rotate so that everyone could sit and visit with them for a few minutes. There was no sense of obligation for Jimmy and Meta to catch up with all of us. It was obvious they cherished every minute of it. There was much joy and laughter around those tables every year.

Finally, Jimmy was a faithful churchman. His scholarship was an academic and spiritual exercise. Jimmy did not see faith and scholarship as mutually exclusive. Indeed, the two went hand-in-hand. In his book, Jesus and the Spirit Jimmy writes,


If God revealed himself most definitively in the historical particularity of a Galilean Jew in the earliest decades of the Common Era, then naturally those who believe this will want to inquire as closely into the historical particularity and actuality of that life and of Jesus’ mission. The possibility that later faith has in some degree covered over that historical actuality cannot be dismissed as out of the question. So a genuinely critical historical inquiry is necessary if we are to get as close to the historical actuality as possible. Critical here, and this is the point, should not be taken to mean negatively critical, hermeneutical suspicion, dismissal of any material that has overtones of Easter faith. It means, more straightforwardly, a careful scrutiny of all the relevant data to gain as accurate or as historically responsible a picture as possible.

And why is a historically responsible picture of the historical Jesus necessary? Because history is critical to theological reflection. The Jesus of history and the Christ of faith are intertwined.

Jimmy was a preacher offering his gifts to the church. The church mattered because Jesus mattered. Jimmy's work can be appropriately described as a faith-filled scholarship. He did not view the subject of his work from afar; he embraced it for it filled his life with purpose. His life's meaning was found in his devotion to the Jesus he wanted to know about because he first knew Jesus in his life and practice.

James D.G. Dunn now rests from his labors, but his work continues in his many writings, his friendships, his family, and in the many grateful students he mentored.

I am one of those students. I give thanks to God for the life of Jimmy Dunn.
Posted by Allan R. Bevere at 6:16 AM