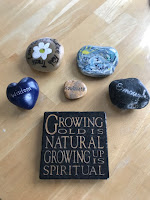 A post from Rev. Tom Snyder, Pastor Emeritus and Visitation Pastor, First and Christ United Methodist Churches, Ashland, Ohio.
___
The stones pictured above rest on the cabinet which stands between Kitty's and my sunroom reading chairs. They remind us of truths which we believe are important and keep us spiritually anchored. Some are more heady than others with concepts such as justice, purity, faith, truth and love, wisdom, and "enough" (which may sound odd, but a sense of which just might be a hallmark of wisdom). One I bought Kitty years ago shows a sunrise and the simple words. "I yearn" - which she has always done in pursuit of spiritual truth. A more sentimental one says "soulmate", a term almost overused these days, but soon coming on fifty years together, we know for us it's true. The last one has a phrase we are still trying to live into: "Growing old is natural; growing up is spiritual". Personally about to move past the three-quarter century mark, I pray that is true!


Stones are a recurring biblical theme, being used for sites for remembrance of God-events, simple ammunition for killing giants, tables for law, territorial markers, building blocks for the temple, walls for enclosure. When the writer of the First Epistle of Peter wanted early followers of Jesus people to remember who and whose they were, he likened their Lord to a living stone, and then poured out a cascade of images of the Lord as a cornerstone at once foundational yet rejected, a stone which caused stumbling, but inviting them, and us, to become living stones, built into a spiritual house in which to dwell (1 Peter 2:4-8). When actively crafting weekly worship services, a frequent plea was, "Let's sing some of the old hymns…" The naughty side of me sometimes emerged, as in choosing "Christ Is Made the Sure Foundation", and billing it as an old hymn since the text is from the 7th century!

Jesus renamed Cephas Peter – Rock, and founded the community of followers that we call church trusting the witness of that often erratic disciple: sometimes bold, sometimes shaky (Matthew 16:13-18). In one of his most memorable picture stories, Jesus contrasted hearers and actual doers of his words with those who simply heard with no ensuing action: between the house sturdily built on rock and the doomed one on sand (Matthew 7:24-27). Who hasn't delighted in hearing children sing the Bible school song, "The Wise Man Built His House…" with the rain coming down, the flood coming up, and the house on the sand going "Splat!"? The final invitation of that charming rhyme is rock-solid: "So build your house on the Lord Jesus Christ".

Not as childlike, but as memorable for many is the gospel hymn, "My Hope Is Built". When Edward Mote (who first used the term “gospel hymn”), cabinet-maker and reporter turned Baptist minister, was on his way to work one day in 1834, he came up with the refrain "On Christ the solid Rock I stand, All other ground is sinking sand", and the church has been singing it with gusto ever since.

While we are living through a pandemic, feeling isolated, angry, or sad, lonely or grieving, weary and wavering in faith, we look for a solid foundation which doesn't wash away beneath our feet, a spiritual house built of other living stones, sometimes as fragile as ourselves. Even if it as small as one of our reminder stones described above, I invite you, beloved, to find an object or symbol, create a sacred space, repeat a treasured scripture verse, or sing a favorite hymn. It is in such as these that we find strength, hope and comfort for our spiritual journeys. I have a hunch that when I wake up in the morning there will be a tune stuck in my head, and it will sound like this: "On Christ the solid Rock I stand, All other ground is sinking sand".

Faithfully, in love, Pastor Tom+
Posted by Allan R. Bevere at 7:13 AM