Pray for All in Authority, That They May Leave Us Alone: A Lectionary Reflection on 1 Timothy 2:1-7 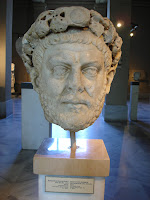 In Paul's first letter to Timothy, the apostle instructs the young pastor to pray for all in authority, "for kings and all who are in high positions." The character of such prayers are intercessory and thanksgiving in nature. Why are such prayers necessary? Because as Paul writes, God "desires everyone to be saved and to come to the knowledge of the truth" (v. 4).

But while God desires all to be saved, another concern is on Paul's mind. Paul wants believers to pray for those in authority "so that we may lead a quiet and peaceable life in all godliness and dignity" (v. 2). In other words, pray that all those in authority will just leave Christians alone to practice their faith in order to bear witness to the gospel.


It may indeed be the case that God has ordered the idea of governing authorities for the purpose of law and order (Romans 13:1-5; When Romans 13 is read apart from Romans 12, it is inevitably taken out of context), and that God does care how the nations and empires of the world behave; but the first concern is the mission of the gospel in the world, and nothing should get in the way of the church's singular task of making disciples of Jesus Christ-- and that includes the principalities and powers of the world when they come in the form of empires and nations. So, Paul exhorts Timothy to pray for those in positions of power because God loves them too and wants to save them, but he seems more centrally concerned (since he mentions it first) that prayers be offered for the rulers that they might simply leave the followers of Jesus alone in order that nothing should hinder the church's mission.

God loves all persons, including those who are able to wield great power, but more than anything, God wants them to stay out of the way so that God's Christian nation, the church, can be about its business.

We do not bring the kingdom of God to earth; Jesus Christ has already done so. But the kingdom of God is revealed exclusively through the mission of the church-- the foretaste of the kingdom. And ultimately, God will allow nothing or no one to stand in the way.
Posted by Allan R. Bevere at 6:59 AM