Franklin Graham and Praying for All in Authority 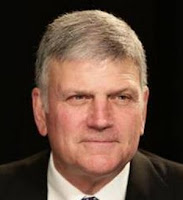 Sunday, June 2 has been set aside as a day of prayer for President Trump because “[his] enemies continue to try everything to destroy him, his family, and the presidency," said Franklin Graham, son of the late evangelist Billy Graham. He and other clergy leaders have called on Christians to set aside such time to pray, it appears, only for the President and not other political leaders in Washington D.C.-- i.e. Congress.

It cannot be contested that the New Testament tells the followers of Jesus to pray for those in authority, but what must be asked is what does the New Testament mean by such prayers? How are we to pray and why are we to pray for those in authority? Taking a look at those prayerful passages might offer us some substantive insights.


First, let me take note that I am not referring to any passages in the Old Testament, not because those Scriptures are irrelevant, but most of the Scriptures that refer to such prayers for the nation and leaders are directed at Israel-- the people of God-- and her kings-- God's anointed. Even though many quote these Scriptures as direct parallel references to America and her leaders, this is a misappropriation of those texts. "If my people who are called by my name humble themselves, pray, seek my face, and turn from their wicked ways, then I will hear from heaven, and will forgive their sin and heal their land," from 2 Chronicles 7:14 is a direct reference to God's people, Israel. To quote it in reference to the United States is to take it out of context.

In the New Testament, however, we have a different story. The people of God, the Church-- God's nation-- is a transnational community of faith with no national boundaries; and when its writers admonish us to pray for those in the Roman empire, it is a situation closer to our current experience as the church in America. No it is not a complete parallel, but it is closer than Israel in the Old Testament.

Now, I certainly do not object to praying for specific leaders in specific situations-- praying for the President on a foreign trip or praying for a member of Congress who is torn on how to vote on a particular bill-- but what Graham is calling for is a time of blatantly partisan prayer drawing up boundaries which we see nowhere in the New Testament-- and we must keep in mind that the Roman empire was not often a friendly authority.

Third, while 1 Peter 2:17 tells us to "honor the king," that does not refer to bald-faced allegiance. The context of 2:17 must take note of two important affirmations: First, in 2:9 Peter refers to the church as a holy nation, thus setting it in contrast to the earthly nations making up the Roman empire. Second, Christians are aliens and exiles in this world. They are kingdom citizens and this qualifies their allegiance to the earthly powers. To accept the authority of the emperor is not the same as unqualified support. Third, it is for the sake of evangelism that Peter encourages the believers to live a life of good works, so that those among the powers-that-be who accuse the followers of Jesus might be shamed in their accusations. In other words, Peter is saying that believers are to live honest and good lives so that the only thing they can ever be accused of is following Jesus. Peter writes "I urge you as aliens and exiles to abstain from the desires of the flesh that wage war against the soul" (2:11).

It may indeed be the case that God has ordered the idea of governing authorities for the purpose of law and order (Romans 13:1-5; When Romans 13 is read apart from Romans 12, it is inevitably taken out of context), and that God does care how the nations and empires of the world behave; but the first concern is the mission of the gospel in the world, and nothing should get in the way of the church's singular task of making disciples of Jesus Christ-- and that includes the principalities and powers of the world when they come in the form of empires and nations. So, Paul exhorts Timothy to pray for those in positions of power because God loves them too and wants to save them, but he seems more centrally concerned (since he mentions it first) that prayers be offered for the rulers that they might simply leave the followers of Jesus alone in order that nothing should hinder the church's mission.

The problem I have with Franklin Graham's call to prayer for the President is that it reduces a deeply profound practice meant to transcend our tribal loyalties and turns it into a partisan political sideshow in service to the empire, which is always what happens when Christians get in bed with the political powers. Their Christian agenda ends up being shaped by the empire and not other way around. The same is true for liberal/progressive Christians. My problem is not praying for the President; it is how Graham has called us to pray-- and because I desire my prayers to be biblical, I cannot participate in the way he desires.

So, this Sunday I will indeed pray for President Trump as I prayed for Barack Obama before him and George W. Bush before them. I will also pray for Speaker Pelosi and Majority Leader McConnell and all members of Congress asking God to give them wisdom and to form in them a strength of character that motivates them to govern justly, rightly, courageously, and honestly. As a Christian I do not consider anyone to be my enemy-- only a stranger I hope to make my friend.

It must be remembered that in all these New Testament admonitions to pray for all those in authority, character is front and center of the discussion.
Posted by Allan R. Bevere at 8:41 AM