Epiphany Is for Seekers: A Lectionary Reflection on Matthew 2:1-12 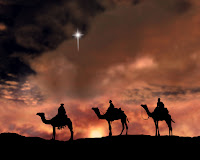 I'm a seeker. I have been from the time I can remember. I am curious about many things with questions about many things. I suppose that's why I'm an omnivorous reader. I love reading theology, biblical studies, and history, but I also read about the big things of the universe. Did you know that Saturn's rings are disappearing? It's going to take 100 million years for them to be gone completely, but one day the planet named for the Roman god of agriculture will be sans rings. I also like reading about the smallest things of life. Several small but significant studies suggest that insect populations have been alarmingly reduced around the world, which is not good news. We human beings and the rest of the planet are quite dependent on those pesky little bugs. I read about such topics and I have questions and so I read some more. As I said, I'm a seeker.


The biggest questions I seek are the questions of faith. As I have become older I have developed an acceptance of the truth that some questions cannot be answered this side of eternity. At this stage of my life I'm OK with ambiguity. I have become content to let God work out the things I do not understand. I have become more certain of some convictions and less certain of others. But I still seek.

Have you noticed how curious children are? They want to know about everything. Their favorite word is "why?" Last summer at a cookout at one of our daughter's house, our oldest granddaughter, who was three and a half grabbed my hands and said, "Gramps let's go for a walk." So we walked around their house which is out in the woods. She asked me about blades of grass and little flowers in the lawn, and insects. I have to confess I am more comfortable fielding questions about atonement and the Trinity, but she was more interested in bugs. Children are natural seekers.

But it does seem that once we become adults what was once so natural to us becomes strange. Perhaps it's the responsibilities of being grown up and having to clock in and out each day in order to pay the bills and rushing around to get our curious children off to preschool and school every morning-- perhaps in not having the time to be curious, we lose the joy, the thrill of being seekers. As adults we can still be seekers, but perhaps it no longer comes naturally. Maybe once we have grown up we have to be intentional seekers.

For those who are seekers, the church has a day for us. That day is Epiphany, which is observed every January 6th. Epiphany means "appearance" or "manifestation." During the season of Epiphany the church focuses on the earthly ministry of Jesus as the revelation of God's presence with the world in Jesus. And on January 6th we read about the greatest seekers of the Christmas story--the magi or as they are commonly called "wise men."

For the magi, seeking was a full-time profession. The word "magoi" is related to the word "magician." These ancient magicians were a combination of astrologers, chemists, and astronomers. They were not kings nor do we know how many of them traveled to Bethlehem since Matthew doesn't say. They were not Jews, but were in fact pagans, but coming from the region of Persia living near a substantial Jewish population, they no doubt heard stories about a coming Jewish Messiah, a deliverer; and when that star or comet or whatever it was rose in the distance in the direction of the Jewish homeland, they probably wondered if it was a sign that this Jewish ruler was rising. So as seekers, they set out on the long journey of 400-500 miles to find him.

How interesting it is that among the first persons to recognize Jesus and worship him were outsiders, strangers, and practitioners of things condemned in the law. At some point in their lives all seekers feel like outsiders as they are not afraid to ask the questions to which the insiders fear the answers. Sometimes those who know the least about faith know more about it than those supposedly in the know. The chief priests and scribes knew the prophecy that the Savior would be born in Bethlehem, but they had missed the moment of its fulfillment. Matthew says that once word of these strangers' visit and the reason for their presence reach the streets, all Jerusalem was frightened along with Herod. It isn't a surprise that Herod was frightened at this news. There was no room for another king in Herod's world. Any sort of suspicion, whether well-founded or not, was sufficient cause for Herod to resort to murder. Caesar Augustus said it was better to be Herod's pig than his son; for the former would likely live longer. So hated and feared was Herod by his people that he knew they would rejoice at his death. Therefore, just before his death, Herod ordered that when he died, the heads of prominent families should be executed in order that there would be mourning throughout the land. Fortunately, the order was never obeyed.

But why would the people be frightened? One would think that the coming of the promised deliverer would be welcomed. Perhaps after many centuries of trial and suffering the people of Jerusalem were no longer seekers. Prolonged suffering has a way of just making us want to hang on and get through life. The curiosity of a promised fulfilled, the hope of deliverance no longer comes naturally. It takes outsiders to remind us of the importance of being seekers.

These wise men--these seekers-- finally find the one they have been seeking and they do the only thing possible--they worship him and offer gifts. After their visit, Matthew tells us that knowing Herod's real reason for wanting to know where this young king was living with his parents, the magi went back home by another way making sure to stay away from Jerusalem. In reading this I wonder it there is a deeper meaning here. On the surface, the magi go home by another route to avoid the tyrant Herod from carrying out another tyrannical deed, though that doesn't stop him as Matthew will tell shortly. But beneath the surface of the obvious meaning maybe Matthew is hinting to us who are seekers that after encountering Jesus, the magi  could in no way go back home as they had been. They had seen God Incarnate' they had unexpectedly seen the fulfillment of their expectations-- as outsiders-- and they were forced to go back "another way," forced to live lives other than they would have lived had they not met this child.

I don't know what seeking, what twistings, and turnings bring people to seek Jesus. But I do know this: If we will dare to come to the manger to kneel, to lay what we have before the baby Jesus, then I promise that, just like the magi, we will go home another way. That other way is the way to life.