Unhitching the Old Testament from the Christian Faith: The Interpretive Implications 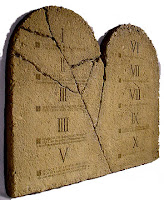 Megachurch pastor, Andy Stanley has caused quite the stir in a recent sermon on Acts 15 arguing that the Jerusalem Council in 49 A.D., which Luke recounts in Acts 15:1-21, gives the twenty-first century church permission to "unhitch... from the worldview, value system, and regulations of the Jewish scriptures." (The Christian Post carried the story here.)


I know many others have already written in response to Stanley's claims, but his words have struck a nerve with me that I have dealt with in other venues. It has unfortunately become rather commonplace in my own mainline Protestantism and now is getting a foothold in some evangelical circles that the Old Testament can be diminished in favor of the New Testament or dismissed completely because of the difficult and even scandalous excerpts found in Old Testament books such Leviticus and Joshua. This revived quasi version of Marcionism is a serious threat to the integrity of the canon of Scripture and to a competent and wise reading of the New Testament. Indeed, the great irony here is that in its efforts to better understand the New Testament, Neo-Marcionism takes away the most important collection of ancient writings needed to understand the New Testament.

In this post, I will not be dealing with the generalities as to why Christians cannot unhitch the Old Testament from the New, nor will I be looking specifically at Acts 15. That is the subject of future posts. All I will claim at this point is that what took place on that day in Jerusalem in 49 A.D. was not an unhitching of the Old Testament from Christianity, and such a thought would not have occurred to any of those present. Indeed what we see in Acts 15 is just the opposite-- the utilization of Israel's ancient Scriptures to tackle the all-important question of what to expect of the Gentiles who already believed in Jesus. In other words, the dilemma before the council was not how the Gentiles are received into the faith, but what are the expectations of them once they are in the faith.

Let me offer one little caveat as I close this post. I know that the angst generated by many in reference to the Old Testament are the extraordinarily difficult passages we encounter-- the bloody violence in Joshua and Judges, particularly the passages where God is said to command such slaughter, the laws concerning women and children that appear to treat them as nothing more than the property of men, and the commandments issued over slaves treating them too as property with no hint of questioning whether or not slavery was an immoral system. These are important and difficult issues, to be sure, and they must be dealt with. But these concerns are hermeneutical-- interpretive-- in character. One interpretive question that is asked is, "What do we do with this?" That is a good question. But the answer to an interpretive question cannot be settled with the question of status-- Is the Old Testament authoritative? To answer "No" is a dismissive response that gets us off the hook of asking hard interpretive questions. (By the way, if you haven't encountered scandalous passages in the New Testament, you haven't read it.)

We do a great disservice to all of Scripture (Old and New) when we take it upon ourselves to reject as Scripture what we do not like as if the church has given us the authority to do so. Moreover, it simply will not do to categorize Scriptures into one of three categories (or more) relegating the scandalous ones to the trash bin labeled, "This Does Not Express the Will of God," as if the church has given us the place to do so. Instead, what the church has traditionally done has accepted all of these books as our canon-- our standard-- and then asked the difficult hermeneutical questions of understanding and application. What does this mean? What do we do with it? What some are wanting to do today is insert a first question, "Is this Scripture? Canon? If the answer is "No," then is no need to encounter the last two questions.

Those who promote quasi Neo-Marcionism are correct in raising concerns over certain passages of the Old Testament. They are wrong, however, to dismiss them because of those concerns. The best way to deal with the difficulties is not simple rejection, but utilizing a sophisticated hermeneutic that recognizes that the Old Testament, like the New Testament, is the story of God and God's people. It is a story that often seems to be a mess, but history is often a mess. And Scripture bears witness that God in his love for his people and the world gets into the mess-- supremely in Jesus Christ-- but in other messy places as well-- Egypt, Canaan, and Babylon. Both Old and New Testaments declare that God has no hesitation involving himself into the mess of the world's history for the salvation of the world.

And for the sake of creation, such a truth cannot be dismissed.
___
Next Post: Unhitching the Old Testament from the Christian Faith: Did the Jerusalem Council Reject the Old Testament?
Posted by Allan R. Bevere at 9:45 AM