Tone Down the Rhetoric on Rhetoric 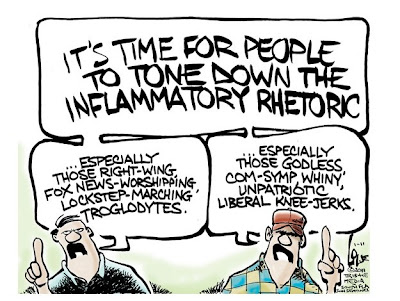 I confess it is a pet peeve of mine, but I strongly dislike the negative connotations now associated with the word "rhetoric," particularly as it is currently used in the realm of politics. It is often employed whenever any political debate gets loud and personal. One side tells the other to tone down the rhetoric. Of course, both sides of the political aisle regularly engage in such negative "rhetoric," but I wish the term wasn't used by anyone as a synonym to refer to incendiary verbiage.


Merriam-Webster defines rhetoric as "the art of speaking or writing effectively." Dr. L. Kip Wheeler writes the following about rhetoric:


Rhetoric is the ancient art of argumentation and discourse. When we write or speak to convince others of what we believe, we are "rhetors." When we analyze the way rhetoric works, we are "rhetoricians." The earliest known studies of rhetoric come from the Golden Age, when philosophers of ancient Greece discussed logos, ethos, and pathos. Writers in the Roman Empire adapted and modified the Greek ideas. Across the centuries, medieval civilizations also adapted and modified the theories of rhetoric. Even today, many consider the study of rhetoric a central part of a liberal arts education.

Rhetoric is critical in the art of persuasion. We recognize this when we comment on someone who says something that does not come out quite right. "It's not what was said; it's how it was said." When we make such a claim we are criticizing someone's lack of rhetorical skills.

So, it seems to me that we should reserve this wonderful term "rhetoric," as it has been traditionally used, and rescue it from politicians and their loyal pundits who could use a little training in the art of the word they use too often and so shabbily; after all, there aren't too many good synonyms for rhetoric in its classical sense, but there are plenty of words that can replace what it is that politicians and their loyal minions often engage in, and it is not the art of persuasion.

Perhaps the best synonym for those kinds of arguments is "demagoguery."
Posted by Allan R. Bevere at 5:00 AM