Waiting for Jesus' First Coming Has Us Watching for His Second: A Lectionary Reflection on Mark 13:24-37 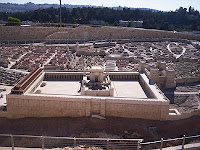 The temple and its complex in Jerusalem must have been one incredible sight as it stood majestically on Mount Zion. Being at the center of Israel's faith, the building elicited pride in faithful Jews. Such is the perspective of the disciples, who point out to Jesus the obvious as they call his attention to the massive buildings and the extremely large stones that comprise the structures.


So it must have quite a jolt for the disciples to hear Jesus' response. "Do you see these great buildings? Not one stone will be left here upon another; all will be thrown down." Of course, the disciples want to know the signs of these events. Perhaps they think such a destruction will signify the end of the world. This would not be surprising. For the disciples the Temple was the center of the world. Jesus is not referring to the end of the world, but the destruction of the temple in 70 A.D. For Jesus, the eschatological age was not yet to come; it had already arrived. This does not mean that Jesus believed that 70 A.D. marked the end of the world, but that the destruction of Jerusalem meant the end of "the world of early Judaism as a temple-centered faith" (Witherington, The Gospel of Mark, p. 340). Jesus had already symbolically pronounced God's judgment upon the temple in driving the money changers from its precincts; now Jesus points to its actual destruction, which he views as God's judgment, not only on the temple, but upon Jerusalem, and the religious leadership.

But, Jesus also has a larger picture of God's judgment in mind. Wars and rumors of wars and nation rising against nation reflect the much larger portrait of the judgment of the world. Although Jesus' words primarily concern events to take place within forty years, there is also a larger view to the end, when the Son of Man comes to judge and to redeem. It must never be forgotten that judgment is redemptive and that redemption involves judgment.

It is critical to note that the signs Jesus' gives his disciples are general and vague and always contemporary. War and suffering, famine and earthquakes, persecutions and false Messiahs have not only been prevalent throughout history; they are the also to be witnessed and experienced in the present, and they will be encountered in the future. Thus, the posture that Jesus is encouraging his disciples to take is not one where such signs signal the imminent end of history, but rather that such events remind them of the necessity to be ready for the end because they cannot know from these signs when it will take place.

And what does it mean to be ready for the end? It does not mean engaging in eschatological weather forecasting by attempting to put these general signs to specific, contemporary events and people. Rather readiness is revealed in Jesus' disciples being about the business of the kingdom. Watchful followers are faithful followers who attend to the work Jesus has given them.

The Second Coming of Christ is in the hands of the Father. The signs Jesus gives do not reveal clues as to when this will all take place; on the contrary, they remind God's people that they have no idea when it will happen. Disciples are not to engage in eschatological speculation, but eschatologically-oriented proclamation and mission. They do not know when history will end, but they do know that they are now in the eschatological age; and that age is now centered on Jesus whose impending death and resurrection will lift the curtain on the last act of the divinely guided drama of history, in which the final curtain will fall in the Director's own good time.
Posted by Allan R. Bevere at 6:00 AM