A Question for Protestants on This Reformation Day: Why Are We Still Protestants? 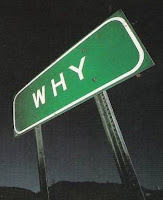 from Stanley Hauerwas, the Washington Post:
___
That the Reformation has been a success... has put Protestantism in a crisis. Winning is dangerous-- what do you do next? Do you return to Mother Church? It seems not: Instead, Protestantism has become an end in itself, even though it’s hard to explain from a Protestant point of view why it should exist. The result is denominationalism in which each Protestant church tries to be just different enough from other Protestant churches to attract an increasingly diminishing market share. It’s a dismaying circumstance.

Under the influence of the great Protestant theologian Karl Barth, an emphasis on the centrality of Christ has been the hallmark of my work in ethics. Yet, perhaps tellingly, a number of my Protestant graduate students have become Roman Catholics over the years. (So many crossed the Tiber that my colleagues joked I was an agent for Opus Dei.) They convert because Catholicism is an intellectually rich theological tradition better able to negotiate the acids of our culture. They also take seriously that Roman Catholicism represents a commitment to Christian unity, not only toward non-Catholic Christians but between the poor and those who are not poor.

I have watched these students join the Catholic Church over the years. They are not wrong. And yet, I remain a Protestant. It is hard for me to explain why that is.
___
Stanley's entire article can be read here.
Posted by Allan R. Bevere at 12:00 PM