Instruction and Indictment: The Sermon on the Mount and Discipleship-- The Beatitudes (The Mourners) 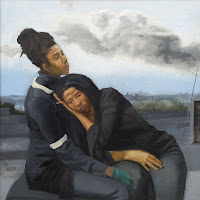 Jesus' second beatitude, "Blessed are those who mourn," is connected to the first beatitude. The poor in spirit know they are completely dependent upon God and that so often they are deprived of even the most basic necessities of life because of the the injustice and oppression of others, both individuals and societies. There is grief in knowing this. For Jesus, these mourners respond differently from the way many Christians would respond today. Scot McKnight writes,

But this kind of mourning is also directed at God in a kind of "How long, O Lord?" plaint that waits on God to act in justice. Once again Jesus is countercultural. Jesus has in mind those who respond to exile properly. Exile for the mourner didn't mean adaptation, accommodation, activism, and apostasy but instead grief, faithfulness, suffering, and hope.(1)

Those who have plenty, who do not need to depend upon God tend to default to the human temptation to self-sufficiency boasting in their accomplishments. Those who mourn have no accomplishments about which to brag. They "have reached the bottom of the barrel,"(2) and so they mourn.

It is important to inquire as to what the mourning are grieving over? If it is correct that the beatitudes echo Isaiah 61 (see the post on the introduction to the beatitudes), then the object of mourning is Israel's subjugation, their exile in their own land under Roman control, and their desire to see Israel restored and once again under the favor of God. In 61:2 the year of the Lord's favor is proclaimed by the Servant that will "comfort all who mourn." In verse three they will receive "the oil of gladness instead of mourning."

In Jesus, God is now in the process of comforting those who mourn the injustices of God's people; for in Jesus God is beginning to make things right and so the mourners are able to endure in the hope that God is now acting on their behalf. The question, "How long, O Lord?" is still not answered, but there is comfort in knowing that at some point, in God's good time, the world will be put to rights. Thus, the mourners can endure. St. Paul writes,


I consider that the sufferings of this present time are not worth comparing with the glory about to be revealed to us....

What then are we to say about these things? If God is for us, who is against us? He who did not withhold his own Son, but gave him up for all of us, will he not with him also give us everything else? Who will bring any charge against God’s elect? It is God who justifies. Who is to condemn? It is Christ Jesus, who died, yes, who was raised, who is at the right hand of God, who indeed intercedes for us. Who will separate us from the love of Christ? Will hardship, or distress, or persecution, or famine, or nakedness, or peril, or sword? As it is written,

‘For your sake we are being killed all day long; we are accounted as sheep to be slaughtered.’

No, in all these things we are more than conquerors through him who loved us. For I am convinced that neither death, nor life, nor angels, nor rulers, nor things present, nor things to come, nor powers, nor height, nor depth, nor anything else in all creation, will be able to separate us from the love of God in Christ Jesus our Lord. (Romans 8:18, 31-39)

The mourners are blessed because they do not despair... and they are comforted in knowing that in the end God will get God's way in Jesus.

In the next post-- the third beatitude-- the meek.
___
Notes

Instruction and Indictment: The Sermon on the Mount and Discipleship: Series Links
Posted by Allan R. Bevere at 6:00 AM