Instruction and Indictment: The Sermon on the Mount and Discipleship-- Dietrich Bonhoeffer 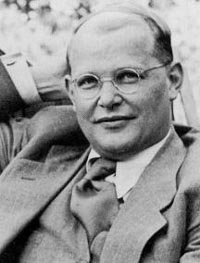 Perhaps his most well known book is The Cost of Discipleship, which in German was originally entitled Nachfolge-- "Succession" or "Following." In this book Bonhoeffer highlights what it means to follow Jesus. Of the four major sections in the book, one entire section is devoted to the Sermon on the Mount. The first paragraphs of the opening chapter "Costly Grace" are words widely recognized and often quoted. I quote only a portion of the entire section of the first chapter (all quotes are from The Cost of Discipleship):

Cheap grace means grace sold on the market like cheapjacks' wares. The sacraments, the forgiveness of sin, and the consolations of religion are thrown away at cut prices. Grace is represented as the Church's inexhaustible treasury, from which she showers blessings with generous hands, without asking questions or fixing limits. Grace without price; grace without cost! The essence of grace, we suppose, is that the account has been paid in advance; and, because it has been paid, everything can be had for nothing. Since the cost was infinite, the possibilities of using and spending it are infinite. What would grace be if it were not cheap?...


Costly grace is the treasure hidden in the field; for the sake of it a man will go and sell all that he has. It is the pearl of great price to buy which the merchant will sell all his goods. It is the kingly rule of Christ, for whose sake a man will pluck out the eye which causes him to stumble; it is the call of Jesus Christ at which the disciple leaves his nets and follows him.

Costly grace is the gospel which must be sought again and again, the gift which must be asked for, the door at which a man must knock.

I have posted these long quote because it sets the context for Dietrich's discussion of the Sermon on the Mount. For Bonhoeffer, those that have interpreted the Sermon as an ideal to strive for, but cannot be attained are guilty leaning toward a cheap understanding of grace. To obey the words of Jesus in this sermon requires God's grace and our willingness to live in a radically sacrificial way. And, Jesus expects us to obey his words. Bonhoeffer writes,


The Sermon on the Mount is not a statement to be treated in cavalier fashion-- by saying that this or that isn't right or that here we find an inconsistency. Its validity depends on it being obeyed. This is not a statement we freely choose to take or leave. It is a compelling, lordly statement.

Dietrich will have no truck with dismissing the demands of Jesus' Sermon as a private ethic only (Carl Henry), an impossible ideal (Martin Luther) or as first century teaching that can only be obeyed by a community without power on the margins of influence (Reinhold Niebuhr). The Sermon is to be obeyed by individuals who follow Jesus and the church community that claims to be the Body of Christ. In his commentary on the Sermon, Bonhoeffer obliterates the sharp line drawn between justification and sanctification. Bonhoeffer states in clear fashion, "The one who believes obeys. the one who does not obey cannot believe."

In order to understand Bonhoeffer's understanding of the Sermon on the Mount, it must be realized that Dietrich draws a sharp distinction between the church and the world. The Sermon is for the church. It puts before us the extraordinariness of the Christian life and is an ethic for those who have made the decision to take up their own crosses to follow Jesus. As Bonhoeffer states in the book in stark fashion, "When Christ calls a man, he bids him to come and die." For Bonhoeffer, the Sermon on the Mount is an invitation to participate in that death daily in order that true life may be found.

In the next post, we begin a discussion of the Beatitudes.
___
Previous Posts

1. Instruction and Indictment: The Sermon on the Mount and Discipleship-- Introduction

2. Instruction and Indictment: The Sermon on the Mount and Discipleship-- A Manual for the Here and Now

3. Instruction and Indictment: The Sermon on the Mount and Discipleship-- John Wesley
Posted by Allan R. Bevere at 10:08 AM