The Aging of Pastors in America and Decline of the Church 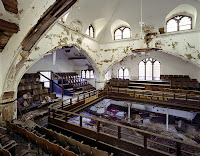 I know it's early in 2017, but this post might be Scot McKnight's post of the year. In my view the #1 theological problem in the decline of the church in the United States is not Christological, but ecclesiological. Christians in America lack a robust doctrine of the church and it's hurting the mission of the kingdom of God.
___
Scot quotes Steven McAlpine:


...for the past fifteen to twenty years we have seen a plethora of books, conferences, blogs, movements etc, that have not only questioned the special nature and role of the gathered people of God, but have actively pushed against it. Go to your local Christian bookstore and you realise that when the kingdom is everything, then nothing is the kingdom.  The church is no longer viewed as the locus of God’s work on earth.  And where it is, it's supposed to be completely fluid to the point that it's hard to see where the church begins and the world ends, and vice versa.

This pushback against the gathered, local church stated that kingdom work was whatever social justice endeavour you could apply yourself to.  The apparent truth of this was doubled down by the increasing hostility towards the established church by the culture.  So not only was there a poor ecclesiology from within, there was suspicion and animosity from without.  Together these were a pincer that squeezed the desire out of many younger skinny jeans Christians (in the almost immortal words of Scott McKnight) to pursue pastoral ministry vocationally. Nowadays church based pastoral ministry has all of the allure of  three-day-old smashed avocado.

Let me recommend three must read books on the necessity of church for kingdom:

Scot McKnight, Kingdom Conspiracy: Returning to the Radical Mission of the Local Church.

John C. Nugent, Endangered Gospel : How Fixing the World Is Killing the Church.