The Totalizing Agenda of Empire 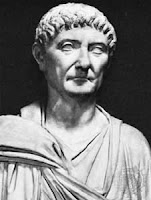 The following is a revised post I published six years ago when Barack Obama was president. I find it just as relevant today in the Age of Trump. As I have said on this blog more than once-- when it comes to nation state politics, I'm an equal opportunity annoyer.
___
The defining feature of Empire is its totalizing agenda. Everything and everyone must come under the service of the Empire. That certainly has implications for how empire relates to those outside its immediate influence but it equally involves how it subjugates those who reside in the empire.

Liberals have used the Empire motif for American international interventions under Republican leadership. It is a characterization worthy of reflection. But what about the Empire building of progressivism?


I resonate this quote from Michael's blog. What recalled it to my mind is the essay I wrote for a book published by InterVarsity Press, entitled Jesus Is Lord, Caesar Is Not: Evaluating Empire in New Testament Studies. Of significance here is Peter Leithart's thought-provoking book, Defending Constantine: The Twilight of an Empire and the Dawn of Christianity.  One of the points Leithart makes convincingly in his book is that the character of empire is not only one of foreign policy but of domestic policy as well. He writes of the reign of the Emperor Diocletian:


In taxation, in religious policy, in administration, he presided over an "activist" government that swept away earlier restraints and inserted state power into the details of daily life.... Not only did this result in a more intrusive Roman government, but it created a new class of bureaucrats whom Lactantius condemned as "rude and illiterate men" who had none of the eloquence of the traditional Roman elites (p. 44).

As I expressed on this blog some time ago, the empire critique being leveled by the Christian political left during the activist foreign policy of George W. Bush had fallen strangely silent with the shift to an activist domestic policy that came to Washington DC with Barack Obama. It's not the case that the empire critique was necessarily all wrong during the Bush Administration, but that those who so strongly embraced it dropped it once the critique became an "inconvenient truth" in putting forward their own activist domestic agenda. As Michael Kruse also noted,


Thus, Empire isn't just about international expansionism but bringing every sphere of life under one authority placing those spheres into the service of that authority. True Anabaptists that I have known over the years get that. That is why they come out from society to be a separate witness. What I don't get are the self-proclaimed Hauerwasian Emergent style Anabaptists who level the Empire critique against Republican internationalism while actively and fervently campaigning for social progressivism. It strikes me merely as social progressivism dressed up in spiritual language.

One of the huge problems with the Christian political left and the Christian political right is that they level the empire critique when it furthers their political program and they ignore it when it stands in the way of what they desire to advance politically. It is true that the religious right does not employ the language of empire very often, but they certainly have been pointing to the totalizing domestic agenda of the left. Such is the character of empire whether or not one uses the terminology. And if empire was "a characterization worthy of reflection" during the Bush years, it was also worthy of reflection during the Obama presidency, and now once again with the Trump Administration.

More than a few years ago, Scot McKnight did a series of posts on the book, Colossians Remixed: Subverting the Empire, which attempted to make a case for Colossians as an anti-imperial tract. In one of his concluding posts, Scot says prophetically,


...I'm unpersuaded of the centrality of the empire theme in Colossians. It can be "read into" Colossians but I'm not so sure it is that easy to "read it out of" Colossians. The "image connection isn't persuasive to me; the lordship connection clearly has implications for empire — whether in Paul's mind or not.

...this book taps into the anti-Bush, welfare state-leaning critique of Western, esp USA culture and for this reason I predict, if a Democrat wins the next election, this book will no longer have any biting edge. Which is to say, it is a tract for our times for some of us. It is not an exposition of Colossians for all times.

Which is also to say that perhaps Christians from both sides of the political aisle have gone down the "empire road" without first mapping the trip knowing where the road would lead. Perhaps things are a little more complex. And perhaps this is one more example that demonstrates what I keep saying over and over, which most Christians on both sides of the political aisle reject-- that the rejection of the politics of the left and the right is necessary if the politics of the Kingdom is to be embodied by the church in its witness to the world. Michael Kruse ends his post thus:


My experience is that most of the Empire talk has little to do with robust theological analysis and much to do with legitimizing political agendas.

Allan, you raise a very thought-provoking critique. May I have your permission to republish this post on United Methodist Insight? http://um-insight.net.

Yes indeed. Thanks for asking.

Thank you! I'm hoping it sparks some vigorous discussion of your well-posed questions about the "empire" critique.