Peace In Spite of It All: A Lectionary Reflection on Luke 2:8-10 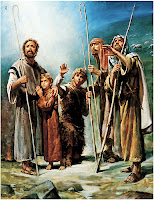 Henry Wadsworth Longfellow was filled with sorrow at the tragic death of his wife in a fire in 1861. The Civil War broke out that same year, and it seemed this was an additional punishment. Two years later, Longfellow was again saddened to hear that his own son had been seriously wounded as a Lieutenant in the Union Army of the Potomac. Sitting down to his desk that following Christmas Day, he heard the church bells ringing and ringing. It was in that setting he wrote:


I heard the bells on Christmas Day,
Their old familiar carols play,
And wild and sweet the words repeat
Of peace on earth, goodwill to men.

And in despair I bowed my head,
There is no peace on earth I said.
For hate is strong and mocks the song
Of peace on earth, good will to men.

Then pealed the bells more loud and deep,
God is not dead, nor doth he sleep.
The wrong shall fail, the right prevail
With peace on earth, good will to men

One wonders if the shepherds watching their flocks felt the same way as Longfellow when he wrote that second verse of his song. They had grown up hearing of God's promise to send a Messiah to deliver his people and bring peace. But it sure seemed as if there was no peace on earth in first-century Judea. Yes, there was the "peace" of Rome, but that "peace" came at the expensive price of freedom. Peace without freedom is not shalom; it is law and order kept in brutal ways.

Now those watching their flocks were being told that God was now making good on his promise to bring peace. And as they beheld this newborn child, they were seeing the one who would usher in the shalom the prophets envisaged. Yet, the shepherds had absolutely no clue as to how this Jesus was going to bring peace. He would do so in a way that would go against the conventional wisdom of revolt and sword, revolution and violence. Jesus would bring peace through, of all things, a cross and an empty tomb.

The New Testament writers were not naive. They understood well that even after Jesus' death, resurrection, and ascension, the world remained a violent place. Yet in the letter to the Ephesians, we are told that Jesus is our peace (2:14). We misunderstand the biblical authors if we interpret this peace only as something individually internal as in "Jesus gives me peace in my heart." Jesus, of course, does that, but St. Paul and the other New Testament theologians still believed that the work of Christ had in some way already brought God's shalom to a violent world and the church, God's people, were to embody that peace for the world. To be sure, they looked forward to that day when such peace would create the context for a redeemed creation without violence, but they also knew that in Jesus God had brought his peace in the present, in the here and now. Such peace is now possible in the church if God's people will abandon the conventional wisdom as to what brings peace in this world and look to the ministry of Jesus as our singular example.

God is not dead, nor doth he sleep.
The wrong shall fail, the right prevail
With peace on earth, good will to men.