Advent: Hope Amidst the Rubble 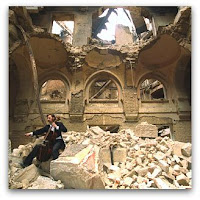 It started in 1992-- the siege of Sarajevo, the capital of Bosnia and Herzegovina during the Bosnian War. Within a short period of time, the city, a historic center of art, music, and culture, was being pounded into rubble. The residents did their best to hide in their homes. People were being injured and killed. There was a serious shortage of food. The people of the city were losing hope.

On May 27, 1992 at four o'clock in the afternoon, a mortar dropped in the middle of one of the few operational bakeries in the city. Twenty-two people were killed, most of them standing in line to get bread. One resident of the city decided he had to do what little he could for the residents of his beloved Sarajevo.

His name was Vedran Smailovic and he was the principal cellist with the Sarajevo Opera. On the Sunday evening following the bakery massacre, Smailovic, with cello in hand, walked to the site where the bakery had stood and at 4:00 p.m., the time of the bombing, played a concert for the people in full tux and tails. He played for twenty-two straight days in memory of the people who had been killed at the bakery. Smailovic played despite the fact that bombs and bullets were falling and flying around him. After the twenty-two days were completed the cellist continued to play in various places-- graveyards and bombed out buildings-- he offered his peaceful and serene music in places that where peace and serenity had been shattered. Smailovic played amidst the rubble until December 1993. As one writer put it:

He played to ruined homes, smouldering fires, scared people hiding in basements. He played for human dignity that is the first casualty in war. Ultimately, he played for life, for peace, and for the possibility of hope that exists even in the darkest hour. Asked by a journalist whether he was not crazy doing what he was doing, Smailovic replied: "You ask me am I crazy for playing the cello, why do you not ask if they are not crazy for shelling Sarajevo?"*

There are people around us, and... yes... in the church, who have given up hope. For those who have abandoned hope, or at the very least, have been tempted to give up hope, Luke reminds us that the birth of John the Baptist, the sign of hope, and the birth of Jesus, our actual hope, have occurred while Israel suffered under the domination of Rome and the vassal and puppet king of Rome, Herod. It is not an accident that Luke begins his Gospel by setting the advent of God's wonderful new hope "in the time of King Herod of Judea" (1:5). But God did not act through Herod or Caesar. Instead, God visited the elderly priest, Zechariah and his wife, Elizabeth who had no children, and who had given up hope of having children, and worked through unexpected people in incredible circumstance. In the midst of their oppression God visited his people giving them hope.

In this Advent season may God's people in their worship and fellowship and ministry play the Great Song of Hope that is the gospel!
___
For further reading on the cellist of Sarajevo:

Steven Galloway, The Cellist of Sarajevo. Riverhead Trade, Reprint 2009.
Posted by Allan R. Bevere at 7:00 AM