The Apologists #13: The Church's Response to Heresy, Part 4 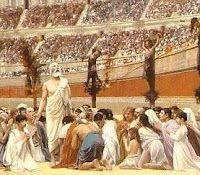 Those who weakened under persecution and renounced their faith and/or sacrificed to the gods were called "the lapsed." After the Decian persecution was over, many wanted to remain as Christians. A great controversy arose over whether the lapsed should be readmitted to the church, and if so, by what requirements? To complicate matters, many lapsed under different circumstances. As soon as Decius issued his edict mandating pagan worship, some Christians immediately made sacrifice to the gods. Others did so only after cruel and painful torture. Others forged certificates stating that they had offered sacrifices to the pagan deities, even though they had not.


Many of the confessors believed that they had the most authority to decide what to do with the lapsed since they had been tortured for their faith, but had remained faithful. In North Africa, many confessors began restoring the lapsed to the church on their own. This was met with opposition from many bishops who claimed that such decisions could only be made by those in official positions of authority. The confessors were joined by many presbyters (priests), who did not like the bishops anyway.

The result was a schism in the church (just one of many). One of the critical figures in this debate was a bishop by the name of Cyprian...
___
Previous Posts

The Apologists #11: The Church's Response to Heresy, Part 2