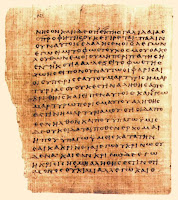 Marcion was the first to put together a list of authoritative writings. When early Christians spoke of Scripture they meant the Hebrew Scriptures, usually the Greek version known as the Septuagint. The Gospels and the Epistles were also read from in the church's worship, but no approved list had been developed. With the coming of Marcion, the church felt the need to respond. They did so, in part, by developing a canon (a standard) of Scripture.


The canon developed gradually. It did not result from the decision of a church council. The idea of a canon was not new to the early Christians. Obviously there was already a canon of Hebrew Scripture. This canon was not formally agreed upon until after the first century A.D.

The information we have about the development of the New Testament canon is hazy. The earliest list of New Testament books which contains the current twenty-seven books appeared in 367 A.D. in a letter written by Athanasius, Bishop of Alexandria. Interestingly enough, his order is somewhat different from the now accepted order: Gospels, Acts, General Epistles, Pauline Epistles, Revelation.

Although there was no formal canon until later, collections of writings began very early. In 2 Peter 3:16, we read of the collection of Paul's letters. In the second century, the letters of Ignatius were being collected. Justin Martyr argued that only our four Gospels ought to be recognized. The Muratorian Canon, which has been variously dated from the second to the fourth centuries, differentiates between books which are suitable for reading in worship and those which are suitable only for personal devotion.

It is important to note that the canon was not a conciliar decision. The earliest ecumenical council (Nicaea, A.D. 325) did not discuss the canon. the first undisputed decision of a council in reference to the canon came in 397 A.D. in Carthage. The formulation of the canon was a process.

Church historian, Justo Gonzalez, points out that the Gospels were probably the first to gain canonical status, which was a direct challenge to the Gnostics. The four Gospels present the story of Jesus from four different perspectives. They emphasize particular details. One Gospel includes one event, another excludes it, but includes another one. The Gnostics claimed that they had secret knowledge from God's heavenly messenger. This heavenly messenger had entrusted this secret knowledge to particular teachers who would share it with others. Gonzalez states, "Against the secret traditions and private interpretations of the Gnostics, the church had recourse to an open tradition, known to all, and to the multiplicity of the witness of the Gospels" (The Story of Christianity, I, p. 63).
___
Previous Posts: