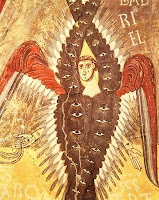 Since Gnostics believed that the physical world was evil, they had to explain its origins. They believed that, originally all reality was spiritual. The supreme being had no intention of creating the physical world. He created a spiritual one in which several beings were created. These spiritual beings were called "eons." One of the eons fell into error and created the material world Fortunately, since the material world was created by a spiritual being, it still contained "sparks" of the spiritual world. These sparks had been imprisoned in human bodies and needed to be liberated through knowledge. In order to gain this knowledge, a spiritual messenger needed to come and awaken the human person from "sleep." For Christian Gnostics, it was Christ who brought that knowledge. Christ had come to earth to remind humanity of its spiritual origins and given it the secret knowledge necessary.


The human spirit is asleep within its body because the body is being driven by the passions of physical existence. In a sense then, the spirit has passed out because the body is simply having too much fun. Christ brings the smelling salts that awakens the human person. Without the secret knowledge Christ brings, there is no salvation. Gnostics also believed that some people were purely physical, with no spiritual spark. Such individuals would be destroyed when the physical world came to an end.

The Gnostics had to answer the question, "If human beings are spiritual, what are humans to do with their physical existence until it is escaped?" They responded in two ways: The first was to say that the body must be controlled. One must not give in to bodily desires and passions. To do so would weaken the spirit. Others held that since the spirit was good by nature and could not be destroyed, the actions of the body were of no account. Therefore, it was acceptable to let the body do whatever it desired.

Early church leaders vigorously opposed Gnosticism because it rejected core doctrines of the Christian faith-- creation, incarnation, and bodily resurrection. All three doctrines affirmed the goodness of the material world.

The goodness of creation is affirmed both by Christianity and Judaism. In the creation account of Genesis, God creates with purpose and forethought. Human beings are intentionally created in God's plan. In Gnosticism, human beings are an accident or a mistake.

It is because creation is good that bodily incarnation and bodily resurrection can be affirmed. If, however, the body is something from which we desire to escape, the resurrection and incarnation are not desirable; they are only continuations of the evil and physical existence that must be rejected.
Posted by Allan R. Bevere at 6:00 AM