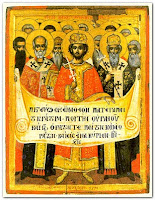 In our discussion thus far, we have danced around an important issue. The issue of "orthodoxy" (Greek; "right belief"). Orthodoxy is not a popular word today unless the adjective "radical" is attached to it. The reason for this is that many see orthodoxy as something which hinders legitimate diversity (and, yes, there is illegitimate diversity). For some it carries with it images of book burnings and the tortures of the inquisitions. There is no doubt that the church has not always dealt with heresy properly. "Heresy" is a conscious rejection of a belief, that is considered by the church to be be normative. Whereas orthodoxy means a "straight" opinion, heresy means a "choice" which deviates from that opinion.


Yet, when we begin to examine the history of the church, we discover that the concern for right belief is crucial in maintaining proper Christian identity. Christians have always believed that the gospel can transform the world and change lives. When someone was encountered who proclaimed a different message in the name of Jesus, the church responded, "No, that is really not Christianity."

When competing messages began to develop in the church, it took time for the church to sort through them. By the end of the second century, most Christians had agreed that some interpretations of Christianity were heresies. These heresies were known as Gnosticism, Marcionism, and Montanism.
___
Previous Posts: