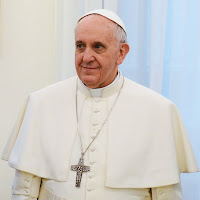 from NPR:
___
One of the greatest rifts in Christianity-- between Catholics and Lutherans-- isn't what it used to be. As a sign of those much improved relations, Pope Francis is traveling Monday to Sweden, an overwhelmingly Lutheran country, to kick off a year-long commemoration of the Protestant Reformation that split the churches 500 years ago.

It was the year 1517 when the German monk Martin Luther pinned his 95 Theses to the door of his Catholic church, denouncing the Catholic sale of indulgences — pardons for sins — and questioning papal authority. That led to his excommunication and the start of the Protestant Reformation.

The Catholic Church reacted with the Counter Reformation, and mutual enmity led to decades of religious wars that devastated central Europe.

Gerard O'Connell, Vatican correspondent for the Jesuit magazine America, says the pope's participation in commemorating the Reformation is proof of the extraordinary change in Catholic-Lutheran relations.
___
The entire post can be read here.
Posted by Allan R. Bevere at 11:00 AM