Living Life Out of Control 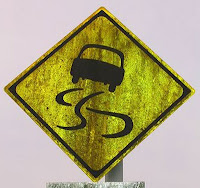 I was involved in an interesting discussion recently on the idea that we human beings forge our own destinies and how that squares with the Bible's affirmation that our lives are in the hands of God. In the course of the discussion we began to talk about forgiveness and how it is easier to forgive than to be forgiven, because to be forgiven means we must let go of our fate and put our destiny in the hands of another. How true it is that we human beings like being in control of our lives. "I am the master of my fate; I am the captain of my soul;" so goes the poem that so many learn in school and recite as if in fact it were true. Falsehoods sound so believable when they are stated poetically.


But to live in forgiveness is to live life out of control; to live in forgiveness means that I must be willing to put my future, my fate in the hands of another. That is just what we must do as we approach the throne of God. Without the willingness to be forgiven and to live life on the terms of another, we cannot find the grace we so desperately need.

Many years ago, I was returning home from North Carolina. As I was traveling on the rainy freeway in southern Ohio, I began to hydroplane spinning my jeep around several times and sliding off the road. By the grace of God I was not injured though I totaled my vehicle; but in those few eternal-like seconds that my car was doing what I could not stop, I not only felt out of control, I was out of control; my fate was truly in the hands of another.

In the Garden of Gethsemane Jesus was willing to place his destiny in the hands of his Heavenly Father, "not my will but yours be done;" and in so doing, God brought him through the valley of the shadow of death and out the other side to victory. And as difficult as it can be, we must learn to live our lives out of control as we live life as those forgiven, as those who understand that we get into trouble, not when we turn the helm over to another, but when we foolishly attempt to master our fate and captain our souls.

In placing our destiny in the hands of the God who will bring history to its desired end, he will see us through to our chief end as we love God and enjoy God forever.
Posted by Allan R. Bevere at 6:00 AM