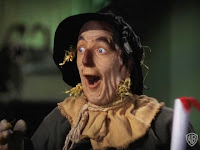 The Nizkor Project states that the straw man fallacy has been employed when "a person simply ignores a person's actual position and substitutes a distorted, exaggerated or misrepresented version of that position. "

Instead of dealing with the substance of why Republicans want to reduce that aid and whether or not it's a good idea, those who oppose their the cuts distort the position. What Republicans said they want children to go hungry?

2) "Democrats voted to increase aid to government food programs and put handouts on the table of lazy people.

Here again we see the problem in logic. The issue of how much money should be allocated to such programs is ignored and the position is twisted into the view that such an increase is for the purpose of rewarding the lazy.

In short, those who engage in the straw man fallacy contort the substance of the argument to make it easier to disprove.

The next logical fallacy: ad hominem
Posted by Allan R. Bevere at 10:00 AM

And when those Straw Men are on display, the occasion is usually The Other Guys differing in their chosen MEANS rather than ENDS. Such as, "Our party proposed Bill 1234 to solve problem X. Those Guys voted against Bill 1234 so that means they are against solving problem X."