The Myth of the Good Old Days 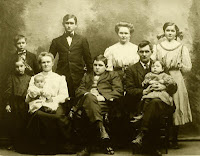 There's lots of bad stuff going on in the world today. A natural worrywart would have a feast wigging out over what is happening in the world and right here in the good ole' U.S. of A. How many times I hear people speaking of the good old days, of simpler times when life wasn't so complicated, when it was safe to let children run free in public and when everyone supposedly went to church every Sunday.

I dissent from such a view.


There is no such thing as the good ole' days. It is a myth constructed by people with amnesia who have forgotten or have chosen not to remember the problems and perils of earlier days. Allow me to offer some evidence:

-In the nineteenth century the age of sexual consent in several states was nine or ten.

-In the 1920s, no law required a divorced father to pay child support.

-Near the end of 1943, Life Magazine ran an article on juvenile delinquency which highlighted among other things, teenagers smoking marijuana and teenage girls waiting to be picked up by soldiers. The article states, "Too many Victory Girls believe it is part of patriotism to deny nothing to servicemen."

-At the beginning of the Civil War, there were proportionately as many abortions being performed annually as there are today.

-In the earlier part of the twentieth century, divorce rates were not nearly as high as they are today, but comparatively the rates of desertion and domestic violence were much higher than in the twenty-first century.

-Today approximately two-thirds of Americans do not go to church. In the nineteenth century the percentage was... two-thirds.

-Preacher and theologian Jonathan Edwards was criticized by fellow Christians for being too stuffy when it came to sexual morality.

-In the period of the American Revolution, it was not uncommon for an engaged couple to have sex prior to marriage.

-The child sex slave trade was just as prevalent one hundred years ago as it is today.

-It is estimated that in the middle of the nineteenth century, there was one prostitute for every 64 men in New York City.

-With all the talk about the problems of health care in the U.S., would anyone prefer the medical practices of 1910? (By the way, the greatest factor for the longer life spans in the developed world today is not the result of today's medicine, but modern methods of sanitation.)

-We talk about pollution today, but one hundred years ago people thought nothing of dumping all kinds of things into streams and lakes and blowing toxic smoke into the air.

-We understandably are concerned about all the additives put in food today, but one hundred and fifty years ago, food poisoning from "all-natural" foods was much more common than it is today.

I could go on and on, but instead I will simply list some sources below where much more information and examples can be obtained.

None of this is to suggest that everybody was wicked and rotten a hundred years ago. There were plenty of good and decent people then as there are now. But we must dispel ourselves of the notion that there was some golden era in American history (or any history for that matter) when all was pure and pristine, wonderful and lovely. Along with that we must also reject the belief that everything is much worse today than it was "back then." This does not mean we should fail to take our problems and challenges seriously, but a little less of "the sky is falling" hysteria would be a good thing... and unfortunately, we have too many "Chicken Littles" cackling around us.
___
Selected Sources

Dean Merrill, Sinners in the Hands of an Angry Church. Grand Rapids: Zondervan, 1997

Stephanie Coontz, The Way We Never Were: American Families and the Nostalgia Trap. Basic Book, 1992.