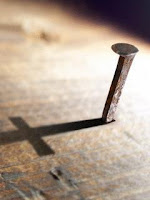 In Colossians 2:13-15, the writers state, "When you were dead in your sins and in the uncircumcision of your sinful nature, God made you alive with Christ. He forgave us all our sins, having canceled the written code, with its regulations, that was against us and that stood opposed to us; he took it away, nailing it to the cross. And having disarmed the powers and authorities, he made a public spectacle of them, triumphing over them by the cross."


I have always been impressed by those who show expertise in craftsmanship, particularly in reference to wood. I took the required shop classes in high school making simple pieces crafting them as best as I could, and enjoying the process; but when it came to the fine work involved in finishing a piece, it was quite clear that I did not have the knack for it. Perhaps with more practice over time I might have developed such a critical skill. There can be no doubt that a piece of master craftsmanship is not finished until the fine detail has been completed.

The work of Christ on the cross is a complete work on our behalf; nothing is left to be accomplished. It is as if the Master Craftsman has looked at the completed work and knows nothing more needs to be done. Paul and Timothy speak of Jesus as having canceled the written code with its regulations. There has been more than a little debate as to whether the written code (lit. "hand-written document") refers to a certificate of debt, a heavenly book of deeds, or the law of Moses. Although I am inclined to go with the last view, regardless of what the "hand-written document" is, clearly the cross of Christ has taken care of the charges brought against us. We were "dead in our sins" and there was no denying the accusation of our guilt; but in the crucifixion the written word against us was made null and void. In his death for our sins, Jesus has "hit the nail on the head," creating a work so complete, so thoroughly done, that nothing further is required. The fine work of salvation is on display for all to see as Jesus hangs on Calvary.
Posted by Allan R. Bevere at 6:00 AM