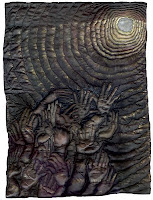 "I wish I could live long enough to see him grow up," he said to me as he held his newborn grandson in his lap, sitting in the chair of his own hospital room. He sat there staring at the baby in his arms, his progeny, who would only know him, his grandfather, from photos and family stories, though they would tell him that his "Pap" did indeed hold his tiny hand and speak to him softly. He sat there in his hospital room, holding his grandson while dying from brain cancer.


Most human beings long to see certain things take place in their lifetime. Whether its something mundane like hoping to witness their baseball team finally win the World Series, or something much more significant like a father being able to walk his daughter down the aisle on her wedding day, most people want to live long enough to see certain things.

In Luke 10, Jesus sends out seventy followers into the world to preach and teach and heal. In chapter 9 Jesus sent out the twelve on their first mission assignment, but now Jesus widens and expands the assault upon the principalities and powers, and this mission of the seventy is indeed an offensive against the forces that would undo God's purposes. Tom Wright notes,


Jesus' task is therefore not simply to teach people a new way of life; not simply to offer spirituality; not simply to enable them to go to heaven after death. Jesus' task is to defeat the satan [the accuser], to break his power, to win the decisive victory which will open the way to God's new creation in which evil, and even death itself, will be banished.

So what did Jesus see, and what did it mean? "I saw the satan fall like lightning from heaven," he said. As the 70 were going about their mission, Jesus in prayer had seen a vision, echoing the prophetic visions of the downfall of the ancient enemy (Isaiah 14:4-23; Ezekiel 28:1-19). Jesus had seen, in mystical sight, the heavenly reality which corresponded to the earthly victories won by the 70. He knew, and could assure the 70, that their work was indeed part of the great victory begun in the desert and to be completed on the cross (Luke for Everyone, pp. 124-125).

Jesus' followers were privileged to witness and participate in the beginning of God's final victory, to see the fulfillment of Israel's destiny, something that kings and prophets of yesteryear hoped to behold in their own day, but died only in the hope that what they longed to see would indeed happen one day. Now that day had dawned; and while the disciples would have some rough and difficult days ahead of them as the message of God's victory in Jesus went out from that ancient land of God's people, they were still privileged to witness the fulfillment of God's promises.

In ancient Jewish tradition the number seventy represents all the nations of the world, based on the table of nations given in Genesis 10. Just as it was no accident that Jesus chose twelve disciples (the twelve tribes of Israel), so it is no coincidence that Jesus chose seventy followers to embark on this mission; for this divine incursion into the territory of the devil and his minions is not only for the sake of Israel, but for the salvation of the entire world. As Jesus continues his final journey toward Jerusalem, he is on the road to the final battle that will take place on a cross and end in the victory of the empty tomb.

Jesus' first followers were privileged to see what others longed to see... and two thousand years later, his followers experience that same blessing. Wright states, "What matters is that God's purpose is going forward, and that they [the seventy] are already enrolled in it."