On Not Looking Back: A Lectionary Reflection on Galatians 1:1-12 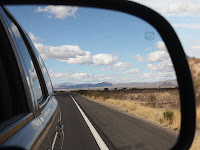 During his ministry Jesus responded to someone who wanted to follow him after he bid farewell to his family, "The one who puts his hand to the plow and looks back is not fit for the kingdom of heaven" (Luke 9:62). In a sense Paul is saying the same thing to the Christians in the region of Galatia. They were looking back, returning to a form of Torah observance, which Paul will later suggest to the Gentile Christians is equivalent to embracing once again their former pagan ways.


Paul's concern is what he calls "the works of the law," which does not refer to good works, but to the practices that had become identity markers for the people of God, Israel-- circumcision, food laws, and Sabbath observance. These markers functioned in a way that separated Gentile churches from the Jewish lifestyle that was so connected to the current understanding of the covenant. Paul writes to the Galatians to defend the existence of the Gentile churches apart from the synagogue in effect taking issue with some of his Jewish Christians who wanted the Christian movement to remain within the social bounds and bonds of Judaism, that is, ethnic Israel.

For the Gentiles in Galatia to take on these practices-- the works of the law-- is to deny the significance of Christ's death as Paul will point out in 2:21. For Paul, this is a different gospel; indeed, the apostle sees what his Jewish Christian opponents are promoting as an anti-gospel, and those who proclaim it should be accursed (1:8-9). Paul's anger at the Galatians is justified. April Yamasaki writes,


Paul wrote to the Galatian church to recall the to the gospel of Jesus Christ-- not the gospel-and-anything-else. They were not to be confused by any other teaching. They were not to seek the approval of others by adding anything else. He used all the apostolic authority he could muster to convince them in his letter. In the same way, this text of scripture challenges us and recalls us also back to the heart of the gospel.

To look back to the law of Moses is tantamount to a return to the Galatians pre-conversion pagan ways. It is only in the cross and resurrection of Jesus Christ that the Galatians can move forward in the journey God has in store for them.