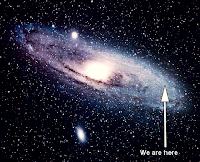 From the time that the first humans became self-aware realizing that there was more beyond themselves, they have searched for knowledge. We want to know. The pursuit of knowledge is a noble endeavor, and as long as we are seeking to know, we need to seek wisdom as well. Once we human beings acquired the knowledge of good and evil, we needed wisdom to use our knowledge for the good. Human history has demonstrated that while much good has come from our knowledge, much evil has also been generated as well.


In 350 B.C. the philosopher Aristotle argued that the earth was at the center of solar system, which meant for some that humanity was also the center of it all. His view of the universe was embraced by the church for many centuries until the sixteenth century when the astronomer Galileo turned his small telescope heavenward and confirmed what the astronomer and mathematician Copernicus suggested a century before-- that our blue and green world was not the center of the cosmos.


Indeed, as our knowledge of the universe has greatly increased, we now know that we live on a planet in the middle of one of the arms of our spiral-shaped galaxy and that our galaxy is only one of an estimated 100 million galaxies, with each one of those galaxies containing millions of stars, and as we are now discovering planets orbiting at least some of those stars. The nearest star to our planet after the sun is Proxima Centauri, which is over four light years away, meaning when we look up into the sky at night and see the light from that star, that light left Proxima Centauri over four years ago. It is astounding to think that the universe we view on a clear night and from a telescope is not the universe as it is, but as it was.

If we had the technology to travel at the speed of light which travels in a vacuum at 186,282 miles per second, it would take us four years and almost three months to get there. The space probe Voyager 1 was launched in September of 1977. It took two years to get to its intended destination, Jupiter. Last September, 36 years after its launch, NASA confirmed that Voyager 1 finally left our solar system. If Voyager 1 were to travel to the nearest star it would take 73,000 years to get there. And that's the nearest star!

What a feeling of insignificance.

About 2500 years ago, the composer of Psalm 8, who did not know everything we know about the universe in which we live, nevertheless looked up to the heavens and asked the God who is more vast than the universe he created, "When I look at your heavens, the work of your fingers, the moon and the stars that you have established; what are human beings that you are mindful of them, mortals that you care for them?" The ancient sage wondered what many have wondered throughout human history-- are we really important? Do we matter in the big scheme of cosmic history and even human history with the rising and falling of kingdoms and empires, of the coming and going of every generation? If the history of Planet Earth were a symphony, human beings wouldn't even be an eighth note on the score. We live on this earth no more than a handful of decades. We seem so anonymous in the vast universe. Does the Creator of the Universe even know we are here?

That same psalmist who wondered whether we human beings are insignificant, thinks twice and acknowledges otherwise: "Yet you have made them a little lower than God, and crowned them with glory and honor." And yes, the psalmist goes on, "God, you care so much for women and men you put them in charge of this world to care for it and every living thing. In your love for us you gave us responsibility." God made us in God's image, and because of that we cannot be insignificant in eyes of the One who created all that is.

In one sense our universe seems to indicate we are insignificant, but in another sense it may indicate we more important than it now appears. Astrophysicist John Gribbin has made a case for the uniqueness of our planet in the history of the universe where intelligent life would have been impossible if it weren't for cataclysmic collisions, our large moon that keeps our  planet stable, devastating asteroid collisions on the planet Jupiter millions of years ago, ice ages, shifting of the earth's ground, the development of grasslands,  and so many more things that had to happen in our solar system and on our planet over millions of years to make intelligent life possible. Had one of so many things not taken place, says Gribbin, we would not be here. Our earth may not be at the center of the galaxy, but that's a good thing because human life could not exist at the center of the galaxy. We are in the right spot, what is called "the Goldilocks Zone"-- we are not too close to the center, nor too far-- our planet is in just the right place.

Perhaps we are not an accident of the universe. Maybe we are here because it was intended for us to be here. Maybe a reserved feeling of significance is not unjustified?

If indeed, we on Planet Earth occupy a special place in the universe, that is certainly not an ironclad argument for the existence of God nor does it demonstrate the truth of Christianity. The veracity of Christian faith is to be found, not in any cosmic knowledge, but in God's encounter with humanity in history in Jesus Christ. It is history that makes the difference for Christian faith. But, if indeed we occupy a special place (not necessarily a unique place), is it unreasonable to think that such a place points in the direction of a Creator who made it so?

It is quite amazing that an Israelite poet some 2500 years ago, pondered then, just as we do today, how we human beings have a significant place in an immense and seemingly impersonal cosmos. The answer to our importance can only be found in the One who put us here on this blue green ball of water and rock.

And therefore, all of us matter.
Posted by Allan R. Bevere at 10:00 AM